The cream is gradually rising to the surface. The Melbourne Storm are setting the standard, the only undefeated side and love being front runners. The Cowboys and Dragons are leading the chase along with the Roosters who got pipped at the post by the impressive Sea Eagles. The brave Knights lost a heart breaker to the Sharks, and the Warriors produced a stirring fightback to topple the Titans. The Raiders ruled in Canberra, while the Bulldogs reminded us of one important unwritten rule of the NRL: never doubt the Dogs!

If you didn’t already respect the Melbourne Storm after their performance Saturday night it’s demanded you do. In one of the best matches of the season, the final score not indicative of how close this was, the Storm displayed all the qualities of a champion team. Taking chances when they appeared and resilient in defence. The Storm goal line resembled a brick wall reinforced with steel. The Panthers tried everything but the Storm desperately held firm, frustration etched on every Panther face. Absorb, absorb, absorb then BANG! Josh Addo-Carr took off and the flying fox scored a scintillating long distance try to put the game to bed and give the Panthers nightmares.

Cameron Smith added another notch on his belt as he took another step towards league immortality. He passed Darren Lockyer for most first grade wins by a player in the NRL or winningest if you want to go all ESPN. A rugby league anomaly, Smith has the body of an accountant with a gym allergy, shoulders like a snake and jaw permanently covered in stubble more suited to a shearing shed or lead singer doing George Michael covers but gee he has one helluva footballer’s brain! Smith is always two steps ahead of the game, controls the speed of the ruck like a puppeteer, kicks goals from anywhere, can do and does everything, he is simply brilliant! The little c beside his name on the team sheet not only stands for captain but class and champion.

Calm has been restored in Belmore, crisis averted, the Doggies found their bark. All the naysayers had Des Hasler booted onto the street wrapped in the Sunday paper for warmth. Fired up, the forwards ripped in to their work with relish.  James Graham led by example inspiring all with a cover tackle that if you squint hard looked like Steve Mortimer at his finest – just ignore the red hair, extra 50 kilos and accent. David Klemmer was back to his bullying bald best and made massive metres with so many Broncos clinging on his back he’d be a shoe in to win the Mormon Wives Carrying World Championships. The Bulldogs are back in the mix heading in the right direction. 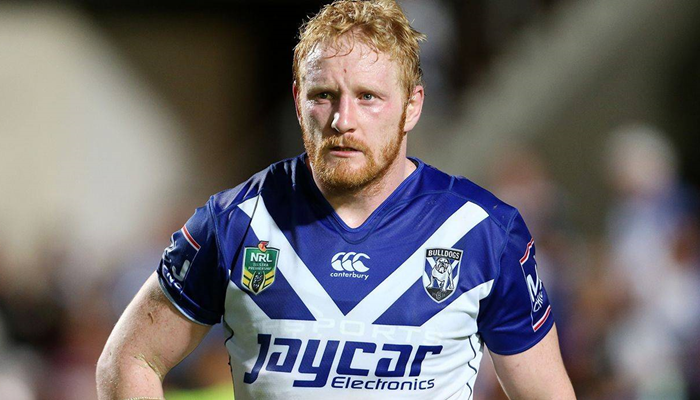 What a composed debut. Matt Frawley came into a huge game for his side that had stunk it up for the first month of the NRL against a tough opponent in dire conditions and he came out smelling of roses. Frawley’s kicking game, the Dogs Achilles heel for ages, was very good and it was amazing how dangerous the Bulldogs were with better last tackle options. A puzzle now confronts Des Hasler as surely you couldn’t drop Frawley. Moving Moses Mbye to fullback is an option to accommodate Frawley but that’s one for Des, that’s why he gets paid the big bucks and I just offer up opinion for… Pass the peanuts please.

Three in a row the Sea Eagles are soaring. The unbeaten Roosters were a big test and the Sea Eagles passed with flying colours. Manly’s big men smashed the Chooks forcing error after error, Martin Taupau monstered the Tricolours knocking Roosters out of his way like feathered ten pins. Manly’s pack led by Jake Trbojevic produced offloads aplenty and the backs took advantage troubling the Roosters on the edges. Impressing most was the Sea Eagles ability to repel the Roosters strong comeback and then conjure the match winning play. The Sea Eagles are backing their ability, entertaining all and heading upwards in a hurry.

Two tries including the brilliant match winner, making breaks and kicking goals, take note: Dylan Walker is back where he belongs in the centres and loving life on the edge. Walker scored a huge points decision over the out of sorts Latrell Mitchell, and his dazzling display put the icing on the cake in a sensational Sea Eagles win. Walker has rebounded brilliantly after last year’s failed five-eighth experiment and is now looking the player he was that earned Kangaroo selection in 2014.

Opposition teams must see the schedule and circle the trip up to far North Queensland with a quivering hand. The Cowboys are playing with such authority and are virtually unbeatable at home. Everyone is doing their job, starting props Patrick Kaufusi and Scott Bolton have stepped up in Matt Scott’s absence. They haven’t skipped a beat and trundled over the top of the Rabbitohs with ease. Polishing off all this hard work the Cowboys Gideon Gela-Mosby shone out wide surrounded by all the experience. Jonathan Thurston and Michael Morgan toyed with the Bunnies and all of North Queensland will be praying JT gets through Origin unscathed.

Eels Not So Slippery

Three losses in a row now, after an encouraging start to the season, the Eels are slipping towards the back of the pack. An away trip to face Canberra in the nation’s capital is never easy and about to get harder when the cold Winter bites, but you cannot afford to give the flashy Raiders such a head start. The Raiders roll like no other and Parramatta’s poor first half gave the Green Machine a push. Brad Arthur will be encouraged by the commitment shown in their spirited second half fightback and were a Blake Austin hand away from a grandstand finish – what an amazing try saver that was! It’s not panic stations yet but the rot must be stopped to get their season back on track.

Kieran Foran finally made it back onto the footy field and played like he’d never left it. He worked his way into the game but when he injected himself into the action he made an immediate impact. He was inspirational in the Warriors much needed come from behind victory against the Titans and topped off his personal triumph with a magnificent try bursting through the defence with his trademark strength and direct running with ball in both hands. Foran’s and the Warriors confidence will only grow, this could be the win that kickstarts the Warriors season and reignites Foran’s career.

No Denying the Dragons

The Dragons ended round five with a comprehensive belting of the toothless Tigers. Devastating defence, combined with enterprising attack, the Dragons confirmed they are the real deal – they are now second on the table! I repeat second! Gareth Widdop again pulled the strings superbly, while Jason Nightingale added a hat trick faster than the Tigers pushed a pen into Ivan Cleary’s hand to sign a contract and man they need him to clean this mess up. The Dragons drilled holes in the Tigers line like a dentist on a deadline. Cleary has a big job on his hands. Mary McGregor meanwhile is gasping for breath as he takes in the rarefied air near the summit of the NRL table. At least one NRL coach is smiling, enjoy it, you deserve it.

I’m now off to wash the egg from my face after doubting the Dragons yet again. I will then swallow my pride and decide whether I should tip them for the first time this year next week or have I missed my window?