Refereeing standards are still an issue

Despite Leeds and Hull putting in a good showing on Thursday night both coaches, it seems, came away rather frustrated. It wasn’t the prettiest of games, with consistent penalties and mistakes meaning it was a very stop-start evening. Whether many of the penalties were legitimate, though, is the biggest debate.

While his side won the game, Brian McDermott was still furious at some of Hull’s tactics, drawing attention to Danny Washbrook dropping the ball to win a penalty on his own line. It’s safe to say that refereeing standards are pretty inconsistent at the moment, with dubious decisions often marring games. James Child’s performance on Thursday is a prime example, as is Ben Barba’s try on Friday, which was almost identical to Tony Clubb’s disallowed one in the Challenge Cup final. Lee Radford also seemed annoyed about Gareth Ellis’ sin binning, especially as Rob Burrow stayed on the field after headbutting Jake Connor. Again, this shows the inconsistency in games, but bans for both players should suffice.

Ben Barba had a mixed Super League debut. His poor pass gifted Oliver Gildart a try early on, before he redeemed himself with a superb individual effort of his own. Despite his best efforts, though, he couldn’t inspire his side to a win, but the early signs do look good.

He was clearly quite ring-rusty after spending a fair few months out of the game, but there were patches where his quality shone through. His fast feet and quick direction changes really puzzled the Wigan defence at times, with players reluctant to dive into tackles through fear that he’d make a break. His arrival poses questions as to the future of current fullback Jonny Lomax, as well as halves Theo Fages and Matty Smith. Fages was the one to miss out on Friday but Justin Holbrook will be looking to rotate his options. 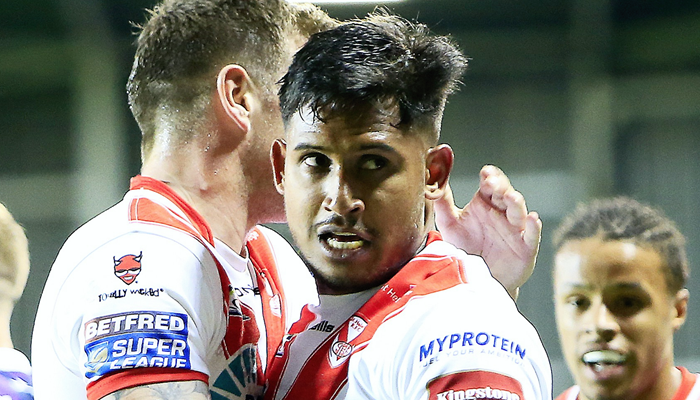 Ben Barba wasn’t the only former NRL star to debut this weekend. Wakefield’s new hooker Tyler Randell made his Super League bow on Friday and certainly made an impression.

The former Newcastle Knights rake scored two tries as Trinity thrashed Salford 43-18 and looks to be a great coup for Chris Chester’s side. Randall isn’t a household name, but seems to suit Super League well with his dynamic running game troubling the Red Devils throughout Friday night. Chester has struggled all season to find a rotation partner for Kyle Wood, but Randall seems to be the perfect pick up.

Another weekend of Super 8’s action has seen another near miss for the London Broncos. Andrew Henderson’s men are yet to win a game in the Qualifiers, with their 40-38 disappointment against Warrington being their third defeat in four games by less than a try.

A 20-18 loss to Catalans was shortly followed by a 35-30 defeat to Hull KR a couple of weeks ago. They managed to grab a 32-all draw against Featherstone in between those games, which is all the Broncos have to show in terms of league points. It’s a frustrating time for the whole club, as wins against opposition of the Wolves’ calibre would be a huge achievement for any Championship club. I guess the key is just to keep persisting and hope that they have enough to get over the line from now on. A win against Halifax on Sunday would be the perfect catalyst for a strong end to the season.

While Super League is only halfway through the Super 8’s, the Australian competition is gearing up for its finals series, after the top eight was confirmed at the weekend. Melbourne have dominated the competition all year, topping the league ladder six points clear of second placed Sydney Roosters.

Brisbane, Parramatta, Cronulla, Manly, Penrith and North Queensland make up the rest of the eight, after the Cowboys just pipped St George to take the last spot. Melbourne are obviously favourites for the title, but I wouldn’t rule out Parramatta just yet. The Eels are on a great run of form, winning eight of their last nine games and have a superb squad, led by gun halfbacks Mitchell Moses and Corey Norman. They’re definitely dark horses so keep an eye on them.