Wigan prop Tony Clubb took to Twitter after yesterday’s semi-final to describe how he and his teammates were pelted with bottles by Salford supporters.

Shaun Wane’s side came from behind at half-time to secure their place at Wembley with a 27-14 win at the Halliwell Jones Stadium.

The Warriors dominated the final half hour, scoring 15 unanswered second half points in front of where the Salford fans were located.

It is believed the Wigan players were hit by numerous plastic bottles and beer from a small minority of fans as they celebrated tries from Michael McIlorum and Oliver Gildart.

Clubb sarcastically tweeted last night: “Wembley!! Thanks to the Salford fans for throwing bottles and beers at the lads appreciate it.”

One supporter questioned the tweet by insinuating that the Wigan players had antagonised the Salford fans by rubbing their noses in it.

But the Wigan prop responded saying that they were also on the receiving end of thrown objects in the first half when Salford scored two tries.

The defeat was a heartbreaking one for the Red Devils who were appearing in their first Challenge Cup semi-final for 19 years.

For Wigan it was a day of celebration as they set up a final against holders Hull FC at Wembley on Saturday 26 August. 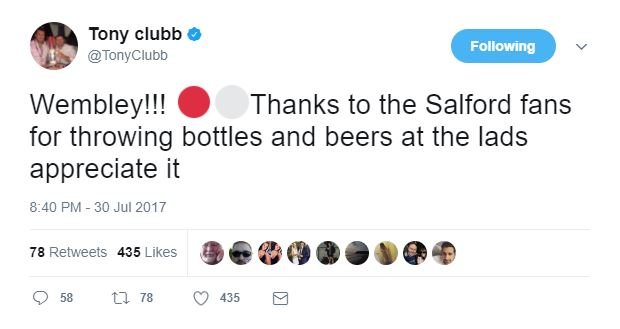