From time to time, clubs release a kit that makes people sit up and take note.

From the original style or flamboyant colours, some jerseys just grab the public eye.

Here are the ten best kits in Super League history.

Leeds may have lost both the Super League Grand Final and Challenge Cup Final in this jersey, but it was a classic to say the least. The yellow and blue mismatch works superbly on the front and the sleeves whilst the old-style collar made this jersey look really sophisticated. Plus, the huge Tetley’s logo actually kind of adds to the whole aura. 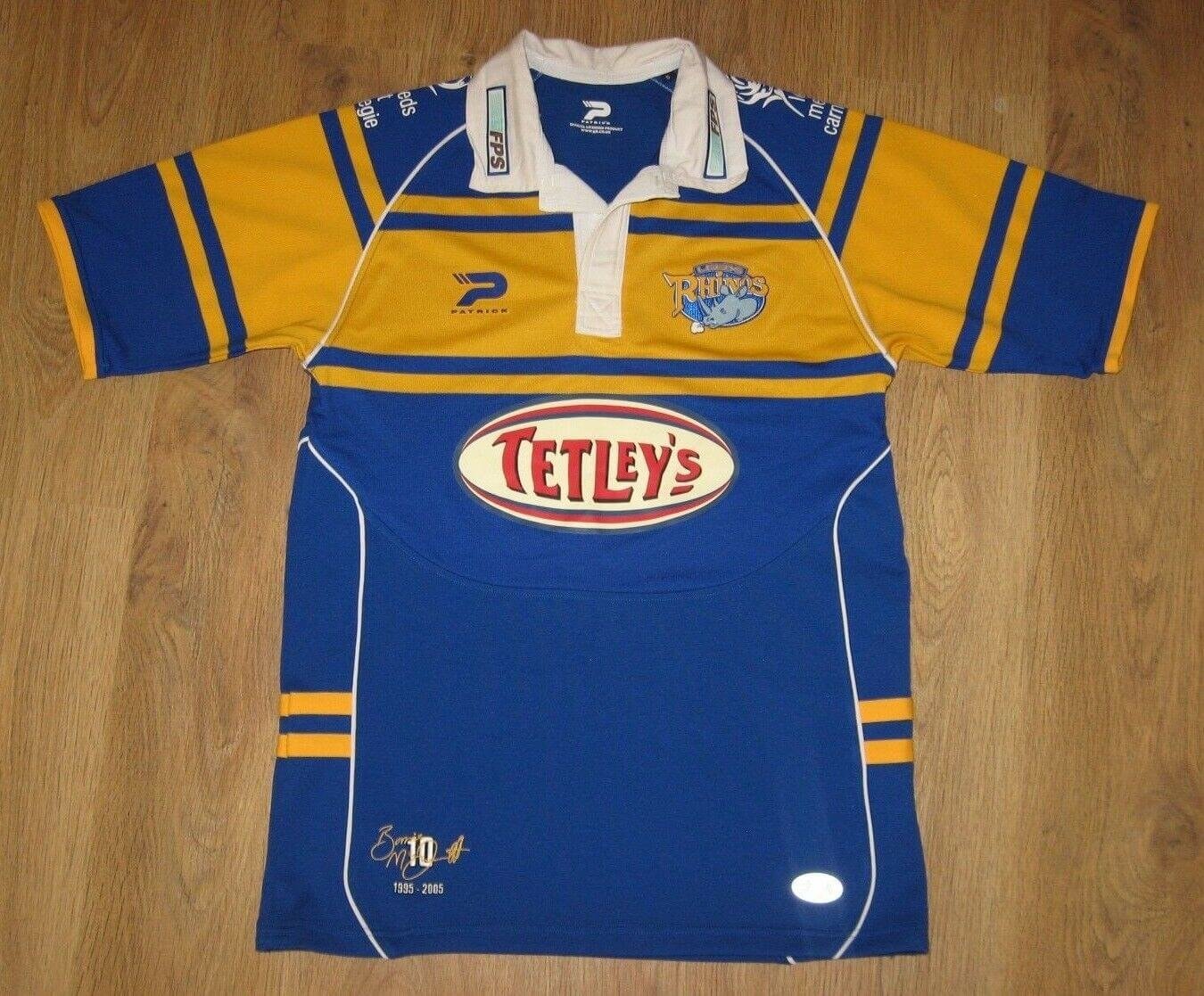 Catalans could have filled a top ten list on their own with some of the vibrant displays they have come up with across the years. However, it’s a black one that takes centre stage here. A fully black design with white markings and gold tints really hits the spot as does the gold collar which makes the colour stand out. Even the sponsors and badge look classy, making the jersey an all-round success. 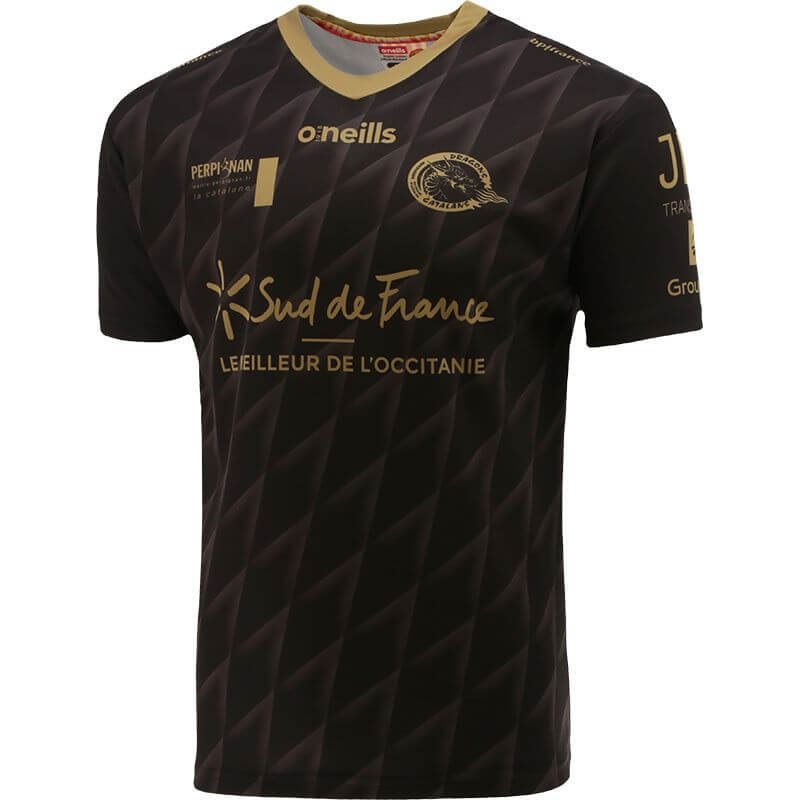 A Warrington choice from left-field, this was the kit in which Andrew Johns famously made his cameo. The choice of white makes the shirt look pristine, with the primrose and blue chevrons looking incredibly stylish. The symmetrical Atlantic Solutions logos also adds to the impression of it being a well-thought and considered kit. 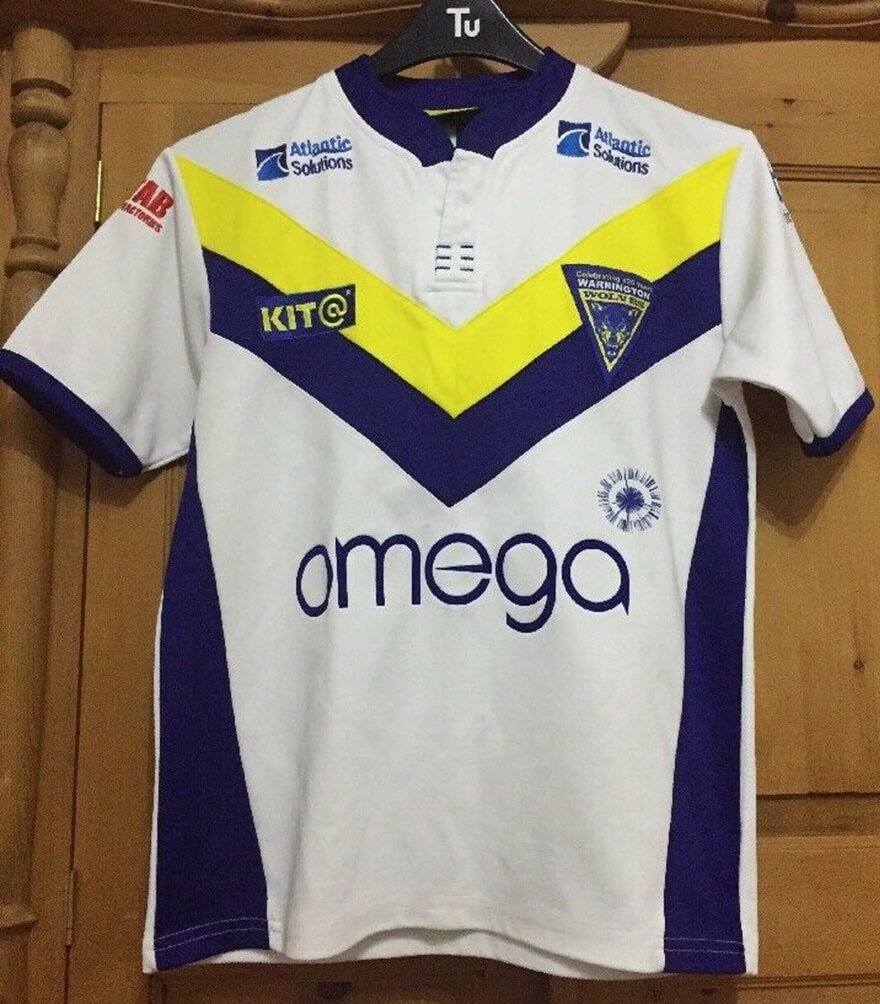 The Red Vee of St Helens is always a striking shirt and sometimes less is more. Saints’ classic in 2006 certainly fits that bill with the traditional Vee adorned across the chest with the main sponsor directly underneath the point – marks for style. The red tips on the sleeves as well down the side pull it all together in a conventionally textbook St Helens shirt. 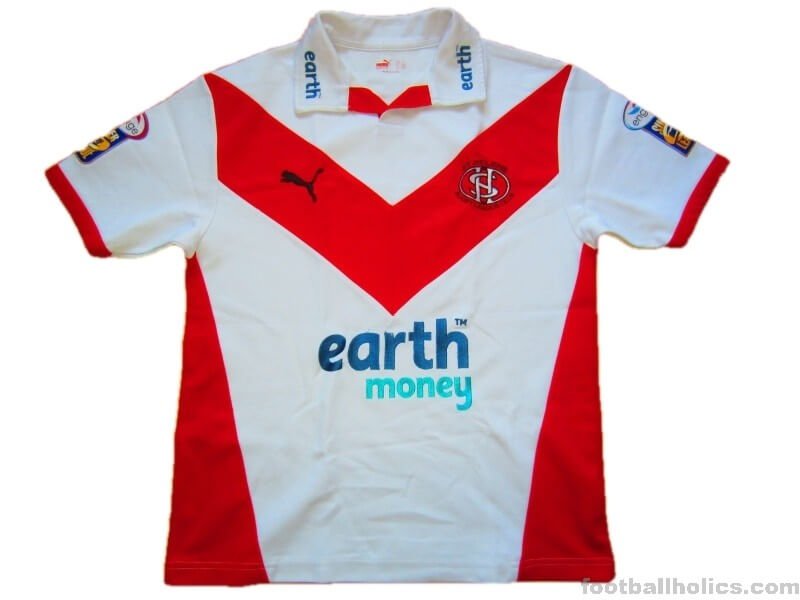 Another jersey from one of the most successful Super League sides, this 2001 concoction certainly looked the part with one red, one yellow and one black chevron placed above a plain white block. A simple design, the Bulls logo and the main sponsor emblazoned on the front appear so natural and the red tinge at the end of the sleeves adds to the effect. Seeing Bradford lift the Super League trophy in this kit was perhaps always going to happen. 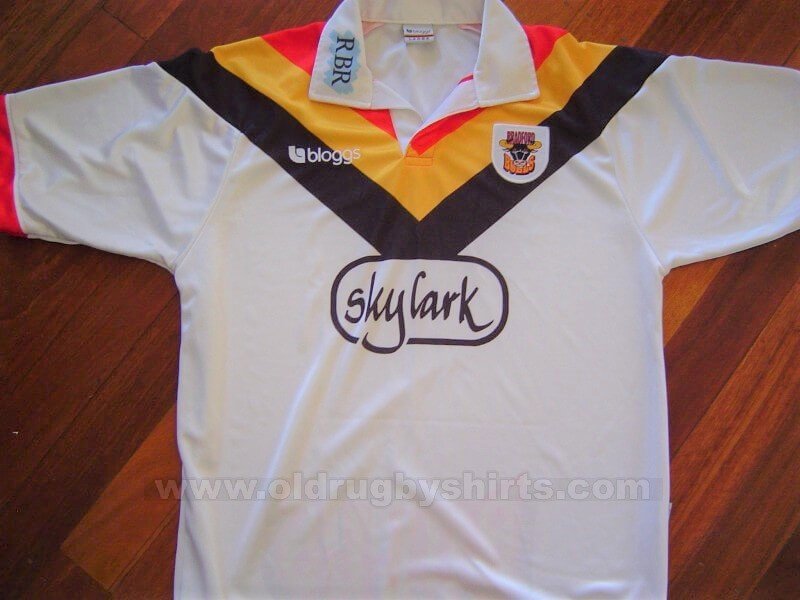 Castleford have had some stand-out kits in the past and this 2018 away kit is no different. A black and light orange amalgamation works wonders and, for me, this is the best jersey the Tigers have brought out in the Super League era. There isn’t much orange going around – just two chevrons and a light tinge on the sleeves – but what there is definitely catches the eye, contrasting superbly with the heavy black. 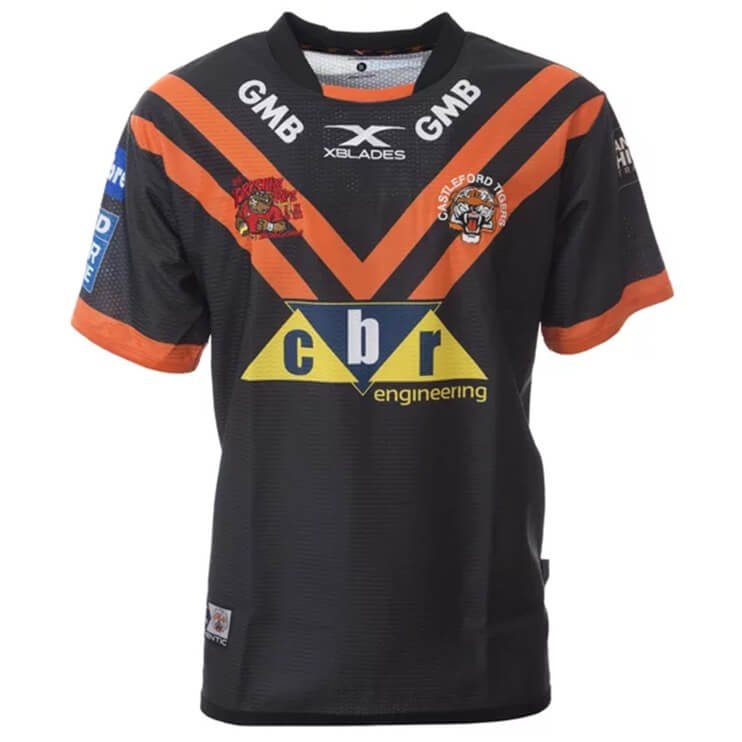 Talk about tradition…It’s particularly difficult for Hull FC to bring out something new considering the orthodox nature of the Black and White kits. But, despite being a conventional strip, the Hull FC home kit looked just an absolute pleasure in 2021. The traditional Black and White hoops were thicker, making the blocks stand out a lot more than the jerseys of the past. Incorporating black sleeves too almost gave an intimidating feel to it too, heightening its impression. 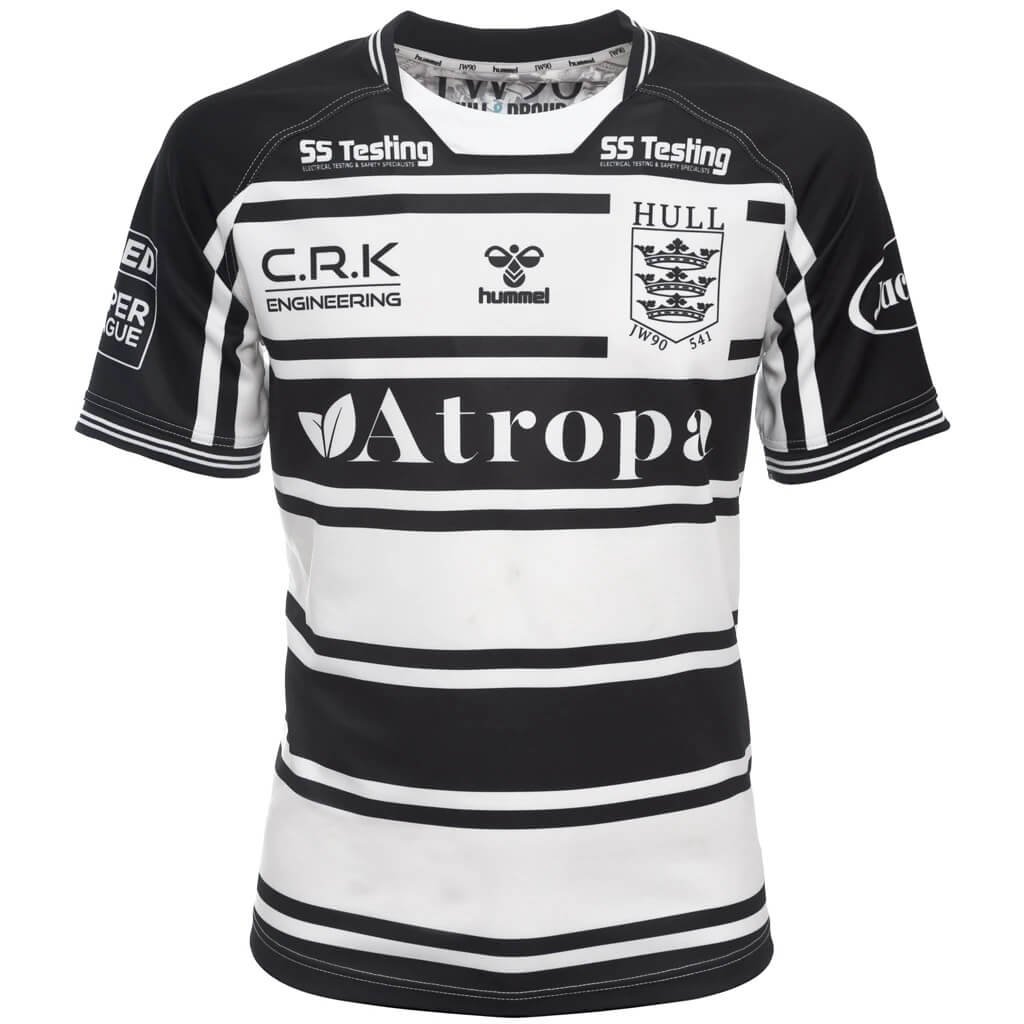 Wigan abandoned their traditional cherry-and-white shirt for the 2021 Super League campaign and boy it paid off. The dark red colouring with black hoops was special to say the least and the new badge and sponsors looked seriously impressive adorned on the crimson background. It really was a smart shirt and was also something different to have in your cupboard. At number three rather than any higher due to the two beauties to follow. 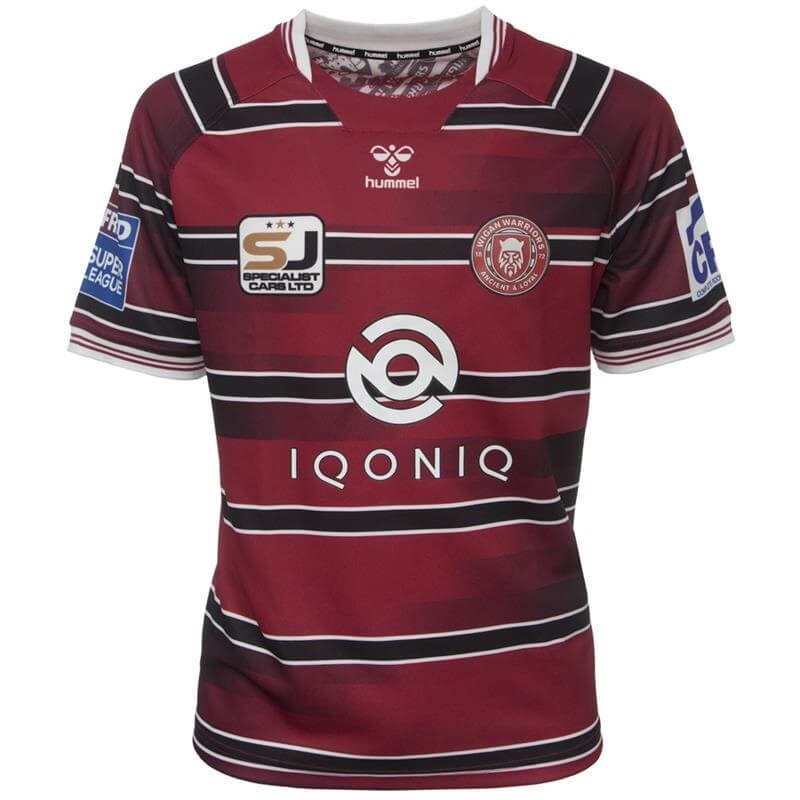 If anything beats the Wigan Warriors shirt of last year, it’s the Wigan Warriors shirt of 2022. The club are throwing it back to their roots and then some with a traditional hoop design in Cherry and White. The sponsor – ironically – is named Iqoniq which is exactly what this shirt is. It really is a thing of beauty – and the away shirt isn’t too bad either! They’ve really pulled it out of the bag for 2022. 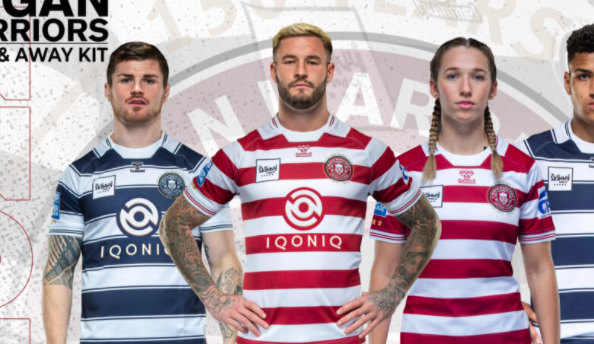 A one-off special for Catalans’ home game with Wigan that was played at Barcelona’s Camp Nou in May 2019, this shirt is incredible to say the least. Based on the famous red and blue vertical stripes of the Spanish football club’s home jersey, there are little changes to incorporate the rugby influence. The red and yellow stripes of the Catalan flag feature on the sleeve cuffs whilst there are beautiful chevrons all the way up the chest, making this one of the greatest shirts to ever be released. 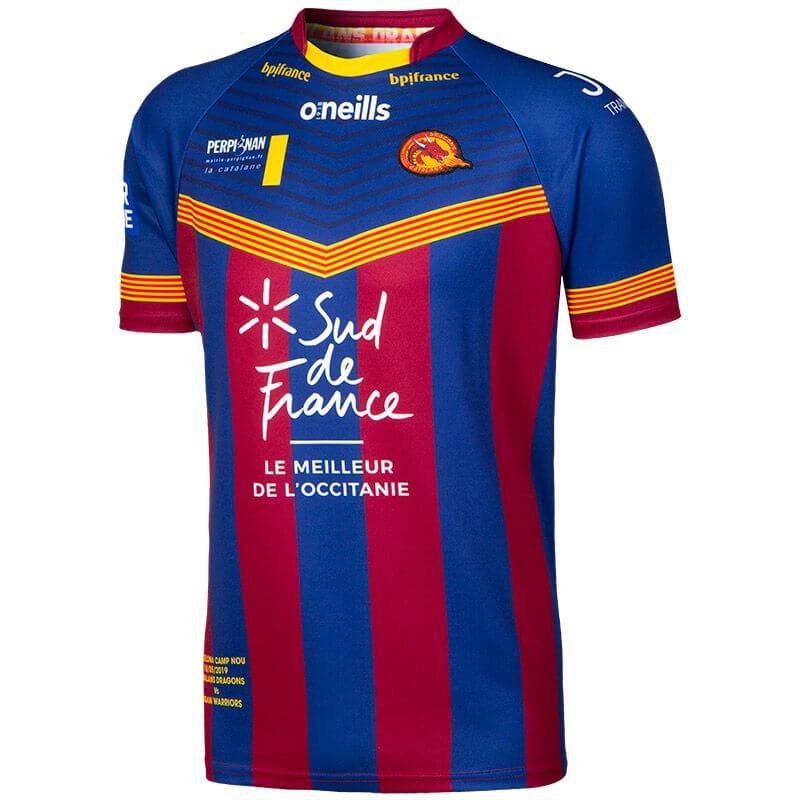