At the beginning of the season, St Helens legend Leon Pryce was part of a brilliant new team with Premier Sports.

Alongside Kevin Brown and Emma Jones, Pryce formed a formidable triumvirate as Championship coverage hit our screens in an emphatic fashion.

However, in recent weeks and months, the former Super League halfback has been absent from the set-up, with the likes of Andrew Henderson and Kyle Amor filling in.

With Pryce eloquent and passionate, he has been missed on the channel, but he returned to the front in last night’s game between Halifax Panthers and the York City Knights in what proved to be an important game in the race for the Championship play-offs. 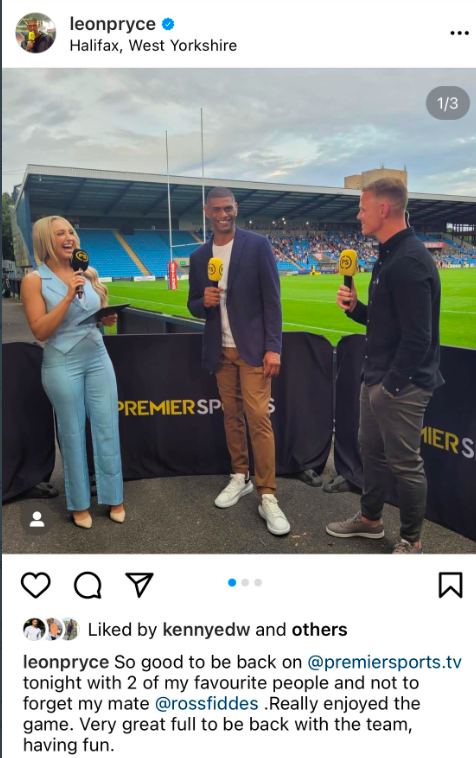 As a Super League player, Leon Pryce was one of the most talismanic halfbacks on his day.

It almost never went that way for him, though, having started out on the wing and it wasn’t until a move to St Helens in 2006 kickstarted a career in the halves.

As a player, Pryce won it all; from the Challenge Cup to the Grand Final, the former Bradford, St Helens, Hull FC and Catalans Dragons star scooped up both individual and team accolades galore.

The 40-year-old won a grand total of six Challenge Cups, six League Leaders’ Shields, three World Club Challenges and four Super League titles in a 19-year spell in the game and also had spells at Hull FC and Catalans Dragons.

Pryce returned to Bradford and to where it all started in the twilight of his career, but a bad injury ended his stay at Odsal prematurely and the playmaker hung up his boots to head into coaching.

After a short period as Workington Town boss, Pryce took his career into punditry where he has been ever since.

His continuity within the game has been to the benefit of every viewer and listener within the sport and it wouldn’t be surprising to see Pryce hit the big time in punditry in the near future.