This promises to be a fantastic match between the two best teams in Super League. After suffering their first defeat last week in the South of France, Saints will be determined to win this after losing top spot to the Wolves. While Saints had a tough game last weekend, Warrington strolled past London which could benefit them late in the game. Despite this, I still think that with home advantage and with the added incentive of revenge after last year’s semi-final defeat, Saints will just have enough to claim a memorable win.

Danny Brough was the hero for Wakefield last week against his former club and he is proving to be a fantastic signing. Wakefield had a tough start to the season but they are coming good now and victory here will cement their place in the top five. Wigan collapsed at Castleford last week and Adrian Lam will have been very concerned after losing a 20-0 lead. It’s another tough trip to West Yorkshire this weekend and I think they might come up short again.

Another fantastic home performance against one of the big hitters by Catalans last Saturday as they added the scalp of St Helens to that of Warrington. They have had some strange results this year the Dragons, notably the big defeats to Salford and Wigan, but normally on home soil they are hard to beat. Hull go there after an important win away to Salford but this will be a much tougher game for them and I can see the Dragons big pack proving too much to handle.

Leon Pryce will travel to Headingley with his Workington Town looking for a huge upset. Leeds are struggling at the moment but they should build up some confidence here and win the game comfortably. Either way, I’m sure Workington’s players will give it their all and you just never know!

A chance for Rochdale to go head-to-head with a Super League side and I’m sure they will relish the occasion and the chance to play at the AJ Bell Stadium. All romance aside though, Salford should have far too much quality and win the game with something to spare.

This should be a really good game between two of the Championship’s better teams. Widnes were shocked by Batley last weekend so I think they will be more determined to get the win, especially on home soil. York are a good side but I think they will come up short here.

What a run Thatto have had in this competition and they were superb in defeating North Wales Crusaders in the last round. Dewsbury know this will not be easy but I think their superior fitness will see them win by a few scores in the final quarter. 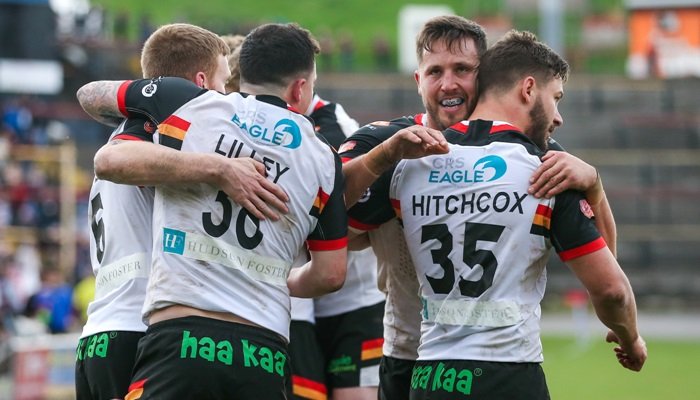 Another all-Championship tie and it promises to be a great occasion at Odsal. Bradford sit two points and two places above Featherstone in the Championship and Rovers battling defeat away to Toulouse will have taken its toll. I think the Bulls will win this game and progress to round six.

Batley will be in buoyant mood after a superb home win against Widnes and they now face a potentially difficult tie away to Richard Horne’s Doncaster. The Dons will fancy an upset here and I think it will be close, but Batley should just have too much for their League 1 opponents.