Jake Trueman may be leaving Castleford Tigers at the end of the season, but that hasn’t stopped him from having an input at the Jungle going forward.

Trueman is set to join Hull FC at the MKM Stadium with a three-year deal having been signed after five years at Castleford, but he has called on the Tigers to sign up halfback Danny Richardson following an emphatic display against the Black and Whites on Friday night.

Castleford eventually ran out 46-18 winners with the Tigers enjoying a stellar second-half performance to score 38 unanswered points against the side that Trueman will be joining.

Richardson enjoyed a brilliant game against FC and has stood out in recent weeks for his superb kicking – both at the posts and in general play – with many Castleford fans calling for a contract extension.

And, Trueman wants Richardson to stay also, tweeting under a photo of Richardson celebrating in the sheds following that game on Friday: “sign the man up.” 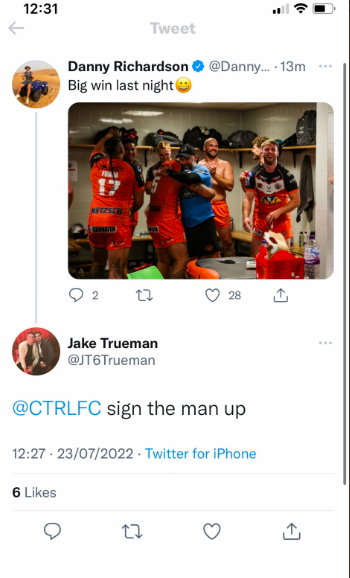 Signing for the Castleford Tigers back in 2020, Richardson was meant to spearhead this West Yorkshire side to glory under Daryl Powell.

In 2018, he was the leading points scorer in Super League as St Helens failed to make it to the Grand Final after finishing top that year, but was axed by then head coach Justin Holbrook.

Richardson spent 2019 on the periphery at the Totally Wicked Stadium, even playing six games on loan at Leigh Centurions before ending his hell with a three-year deal at the Jungle.

Wind the clock forward to 2022 and it hasn’t really worked out for the halfback with spells of good and bad form whilst a serious injury at the start of this season hampered his ability to potentially win a new contract under new boss Lee Radford.

With speculation mounting that the Tigers are heading into the market for Wakefield Trinity halfback Jacob Miller, it does leave a question mark as to where Richardson’s future may lie, though Jake Trueman’s exit has thrown up a potential avenue for the former Saints man to stay at the Jungle.

The 25-year-old was linked with a move to Wigan Warriors earlier in the year but nothing came of it, whilst it was reported that Richardson had been offered to other clubs at the end of 2021.

That being said, it is obvious that the halfback is thriving under Radford, with Richardson looking like he is enjoying himself out on the field and his performances in previous weeks have left some Castleford fans wanting the 25-year-old to be given another big shot with the Tigers.

With Trueman on the injury table, it has left Richardson as the go-to man at the Jungle and his progression in recent weeks has been huge. If that is putting himself in the shop window instead of staying at Castleford, he would prove a major asset for a number of clubs.