A former Castleford Tigers man has been banned for TWO MONTHS after being found guilty of assaulting a match official.

That man is Alex Foster who was playing for Newcastle Thunder against Bradford Bulls.

… and admitted the offence but challenged the grading. However, the tribunal found him guilty at Grade F. (2/2) pic.twitter.com/sTnmLPkCjL

Castleford will also be without Cheyse Blair for their visit to Hull FC on Friday night following his dangerous hit on Warrington’s Josh Thewlis on Saturday. Blair will also miss an extra game after the clash at Hull.

However, Welsby, despite being cited and charged, will be free to play next weekend as will Leeds Rhinos’ Sam Walters.

The Disciplinary Match Review Panel stated: “Law 15.1(i) Dangerous Contact – A defending player makes contact with an opponent after the ball has been released by an opponent in a vulnerable position which causes flexion to the head, neck or spinal column on an attacking player, which poses an unacceptable risk of injury to that player. Grade A.” 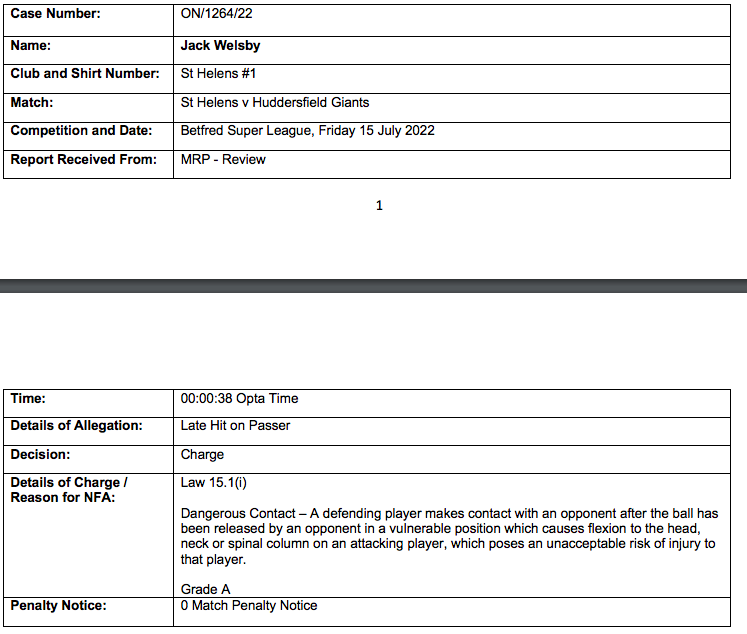 Walters, meanwhile, did not receive a ban either with the Match Review Panel stating: “Law 15.1 (b) High Tackle – Careless – ball carrier dips Grade A.”

As such, it means that Welsby is free to take on Wakefield on Sunday afternoon whilst Walters can play for Leeds against Wigan on Thursday night.