Ahead of tonight’s huge clash at the Mend-A-Hose Jungle, which is live on Sky Sports, here’s my combined XIII between Castleford Tigers and Hull FC.

Possibly the hardest pick I’ll make for this combined XIII. With Shaul being arguably the best attacking full-back and Hardaker easily the best defensive, it made this choice very difficult. However, Hardaker is England’s best and he’s probably even better this season than when he won the Steve Prescott Man of Steel trophy in 2015. He has scored four tries and assisted 12 for the high-flying Tigers, with more to come from the former Leeds favourite.

Frankly the wingers for this team pick themselves as both Minikin and especially Eden have been sensational this season with only Liam Marshall at Wigan getting anywhere near their standards. Minikin has scored 15 tries and most of those came early in the season when he surprisingly led the try scoring charts.

The first Hull entry into this team and it’s a worthy one. Fonua was a big part in the Black and Whites ending the Tigers cup dream and he was when the teams met earlier in the season, as Hull won 24-22 with a man down. He’s hard to handle and reminds me so much of Leeds’ Joel Moon with his strange running style and powerful fend.

Shenton, for me, has been back to his best this season and despite being the captain, perhaps has not got the credit he deserves. He has an abundance of skill and confidence and as is a great leader of this fine team. In 2017, Shenton has amassed 13 assists with a credible 22 clean-breaks.

Eden is a record breaker. He broke the record for Castleford tries in a game for one player and he looks set to break Denny Solomona’s record of tries in a season. Many fans mocked the signing of Eden saying things like “he can’t catch, let alone score,” but boy were they wrong! He’s made 35 clean-breaks – 10 more than anyone else in the Super League – and scored 31 tries – a massive 11 more than anyone else. The lad deserves an England spot, but with proven quality in those places it’ll be hard to replace them.

Kelly has been one of the signings of the season. He’s added an extra edge to the Black and Whites attack and has formed a solid partnership with Marc Sneyd. His ability to control games and manipulate the tempo of them is extraordinary. The turn of pace from the former Hull KR man has led him to notch up 17 tries and seven assists for the Airlie Birds.

The architect: Gale is a level above any player in Super League at present which is some going considering the quality of halves such as George Williams, Joel Moon, Robert Lui and the aforementioned Kelly. Gale is the main reason Castleford are riding high and his ability to throw a cut out pass is incredible. He’s scored 11 tries as well as assisting 17 times, so he’s no slouch when it comes to finding the try line.

Millington has been a model of consistency for several seasons, but this year in particular he’s really knuckled down and become the cornerstone of the Tigers’ pack. His ability to cause havoc is underrated and he’s shown that, not only with the metres or tackles he’s made but with his tries and assists – standing at five and four respectively. 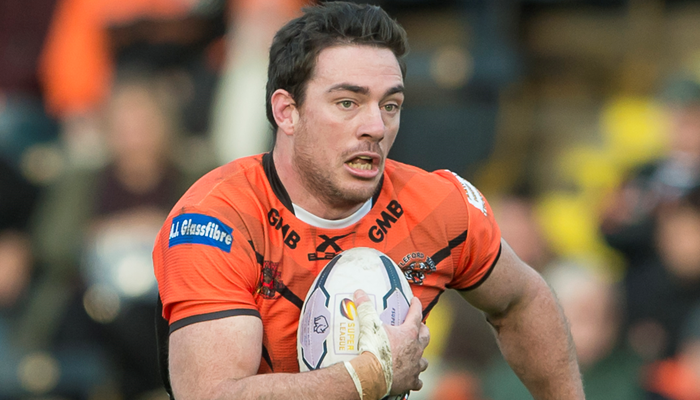 To some McShane is the best hooker in the league, and although he has close competition this season from the likes of Matt Parcell, he’s certainly been better than the reigning Steve Prescott Man of Steel Danny Houghton. Houghton is defensively better but McShane is supreme in every other way and it’s shown by how he keeps the Tigers’ attack flowing to devastating effect.

If I’m honest, Watts makes this side but only just. He’s as good as Lynch but has youth on his side, however his discipline lets him down so this may be a controversial pick by many. Watts was on the verge of an England call up and deserved one. Suspensions has seen him have a stuttering period in the middle of the season, but he’s certainly a strong reason why Hull are able to gain metres easily in the hardest of games.

The unsung hero of the Cas’ team has become an England international this season after his debut against Samoa. And he’s been in superb form for the Tigers, making almost 1,700 metres and pitching in with six tries and nine assists. This lad has a very bright future ahead of him.

Despite being 36 years-old, Minichiello is showing that age is just a number as he continues to produce top quality performance every week. He batters opposition teams’ packs with pure determination and strength to get his team close enough to the line, this allows the likes of Kelly and Sneyd to work their magic on the front foot.

‘JSL’ has been simply brilliant for the Tigers in every area of the field. He’s great in defence, making 401 tackles and he’s just as great in attack with five clean-breaks and six tries. Junior Moors may have made the team had it not been for injury, but Sene-Lafao is more than a capable replacement for this side.