Benji Marshall has responded to claims that he will be putting his boots back on to play bush rugby league in 2022.

Marshall, who last played rugby league in 2021 for South Sydney Rabbitohs, has been linked with a move to Sam Burgess’ new side Orara Valley Axemen.

Burgess spoke to the Daily Telegraph about the possibility of Marshall turning out for his side, saying: ““It could be great for the competition and country rugby league, which certainly needs some rejuvenation and some excitement.”

33-year-old Burgess said 36-year-old Marshall was ‘excited’ about the prospect of and that the community would certainly prosper from a decision.

“Benji would also be a great asset for any young kid who is playing. Any young half that is pretty tidy would benefit from Benji Marshall being around.

“I have spoken to him about playing a few games and he did show some excitement.

“I don’t want to pressure him to play because I know he is busy with his commitments and with his family. But it would be great for the competition up here.”

Burgess himself also wants to turn out again in 2022 after retiring due to a horror shoulder issue back in 2019.

I want to see if I can play a few games if I can get a clearance,” Burgess said. “I’m contemplating playing. It would be great.

However, Marshall has since rubbished the reports on his own Instagram profile, stating: “Nothing to see here and not true! I am not playing full stop. So change the headline to not considering playing.” 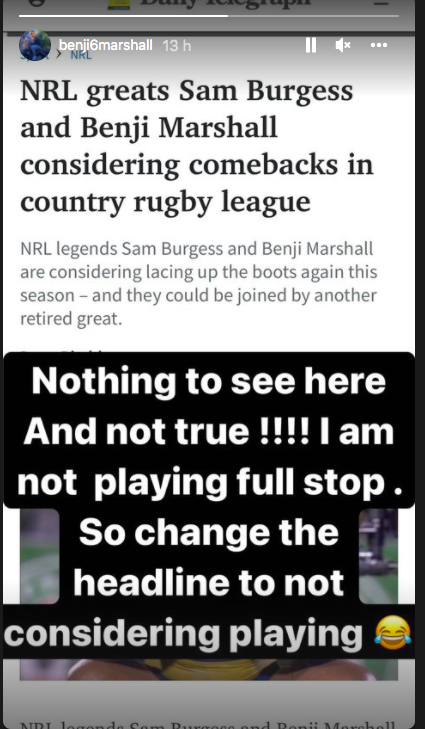