John Bateman’s Australian partner has spoken out about rumours that the Wigan forward is set to move back to Australia after less than a year back home.

The Daily Telegraph’s Dean Ritchie had reported earlier today that Wests Tigers were leading the race for his signature after Bateman’s partner was said to be homesick.

“It was a whisper over the weekend and now it’s become the talk of a number of clubs,” The Daily Telegraph’s Dean Ritchie said today.

“There’s no offer yet, but he’s over there in England playing for Wigan at the moment.

“He’s married to an Australian and there’s a suggestion she’d like to come home.

“I think the Tigers would look at him as he’s the player they need and obviously Michael Maguire’s link to Wigan.”

However, Bateman’s partner – who he is not actually married to – has since taken to Instagram to dispel such rumours, stating that “the media is continuing to run with and add to a story that I am homesick and pushing for John to speak to clubs/return to the NRL.

“I just want to come out and say that none of the above is true. I have never stated publicly nor privately that I am homesick as that is not the case.

“I love John and I love our life in England. I have no desire to move home at this time.

“I appreciate all the messages of concern to myself and my family, I promise I am absolutely fine.”

Good news for Wigan fans who will be raring to see Bateman in action as the Warriors take on Warrington at the Magic Weekend this weekend. 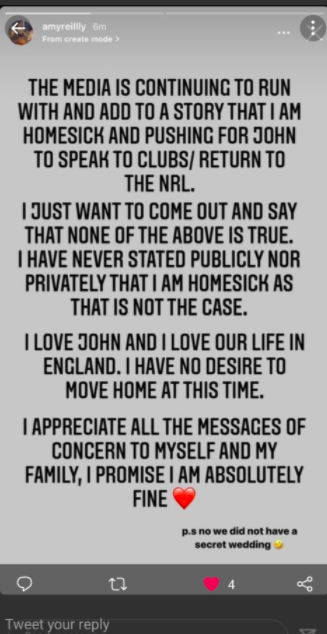