Zak Hardaker has posted for the first time since he was announced as a Leeds Rhinos player.

Hardaker was announced by the West Yorkshire club this morning following days of speculation after being let go by Wigan Warriors.

The fullback or centre had been dropped by Wigan boss Matty Peet for ‘dipping’ below standards with his move to Leeds generating speed in the past week.

And, he has posted for the first time, with merely a prayer emoji and a blessed emoji after being tagged in a post by his agent ultramanagement. 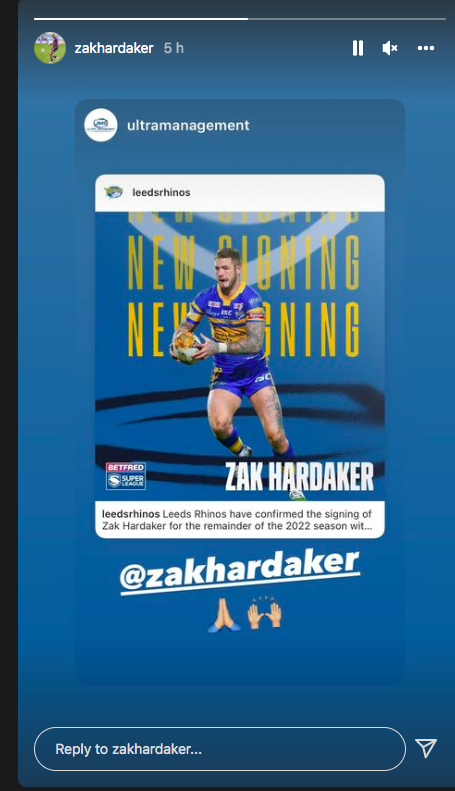 Leeds Rhinos Chief Executive Gary Hetherington commented on the move made this morning: “We have had to move quickly to secure the services of Zak for the remainder of the season.

“Unfortunately, we have suffered injuries to our backline with Liam Sutcliffe and Tom Briscoe the latest to join that list during Friday night’s win over Toulouse. Centre and full back, in particular, are areas where we have long term injuries to Harry Newman and Jack Walker and Zak will provide experienced cover in both these positions.

“I have spoken to Zak on a number of occasions over the last few days and he spoke with Rohan Smith over the weekend. The short-term contract works for all parties in this unique situation, and I am sure Zak will be aiming to show his best form on the field now he is back in blue and amber. Credit must also go to Jamie Jones-Buchanan who was open to welcoming his former team mate back into our environment,” added Hetherington.