Wigan Warriors will go up against Toulouse Olympique on Friday night.

Head coach Matt Peet will welcome back John Bateman after he broke his ribs in Wigan’s Magic Weekend clash with St Helens, and there is one other name in the squad that may come as a surprise.

That is James McDonnell who has been on loan at Leigh Centurions and has been recalled due to the suspension of Mike Cooper and the desire to change things up following last week’s defeat to Wakefield Trinity. 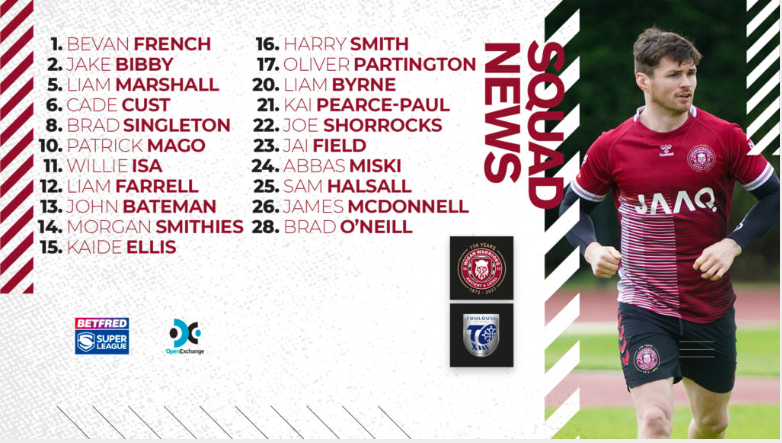 That game saw Patrick Mago sinbinned, but he wasn’t subsequently banned which will be good news for Peet after the disappointment of the Belle Vue fixture.

Up next for the Warriors is French side Toulouse who themselves are in a very desperate position, being four points adrift at the bottom of the Super League table following a 32-18 defeat to Warrington Wolves last weekend.

Peet spoke on Bateman’s return to the squad: “A timely boost. He’s worked very hard, he’s been dying to play for a while now. He’s looking great in training and he’s a quality player but he brings us that leadership as well.”

💬 MP on John Bateman’s return to the squad: “A timely boost. He’s worked very hard, he’s been dying to play for a while now. He’s looking great in training and he’s a quality player but he brings us that leadership as well.”#WWRL #SLWIGTOU

Of course, McDonnell will be playing for the Leeds Rhinos in 2023 after Rohan Smith brought the young Englishman to Headingley in a bid to put his own stamp on his Rhinos squad.

Commenting on signing for the Rhinos, McDonnell said: “Leeds is a massive club and I was really pleased to accept their offer. Working with Rohan Smith was a big pull for me. He was the first person I met and had a conversation with and he is the type of coach I want to learn from. This will be my first step outside of Wigan but I am looking forward to moving over to Leeds and starting a new chapter. I came over to Headingley a few week ago and Rohan gave me a tour around the stadium, which is world class.

“The good thing for me is that I know a lot of the lads from England camps so I am not going blind into a new environment because I have already got some good mates there.

“You can see already the difference that Rohan is having on the squad and this is a new start for me and I want to have success with the Rhinos. The club has a massive fan base and hopefully we can give them plenty to celebrate.

“Moving away from my home town club was a massive decision for me. I have loved every minute at Wigan and feel proud and privileged to have played for them. It was hard to say no to the stay but I knew this opportunity was too good to turn down.”