Canterbury Bulldogs are expected to announce the signing of Canberra Raiders and former Wigan Warriors forward Ryan Sutton on a three-year deal later this week.

After five seasons at hometown Wigan Warriors in the Super League, Sutton joined the Canberra Raiders in the NRL and has since played almost 60 games for the Green Machine.

But, according to the Daily Telegraph, the rampaging forward could be set for the exit after three seasons in the capital.

Canberra CEO Don Furner had previously told the Canberra Times that the club could lose a number of their stars with the admittance of a new NRL side in Brisbane.

“They just gave us the financials and why it would add up and why it expands the game. And I think everyone’s in agreement,” Furner said.

“We’re an expansion club. We understand the benefits of expansion for the game and we just needed to see the financials, and they looked good today and we’ll support it.”

Sutton played 25 games for the Raiders in 2021, but Canberra endured a seriously disappointing campaign, finishing outside the finals spot despite being touted by many to compete for silverware at the business end of the season.

Now, though, Sutton’s partner has hit out at the club after the forward was not included in Canberra’s squad for their opening game of the 2022 NRL season.

She posted on Instagram: “I thought the fashion industry was bitchy.” 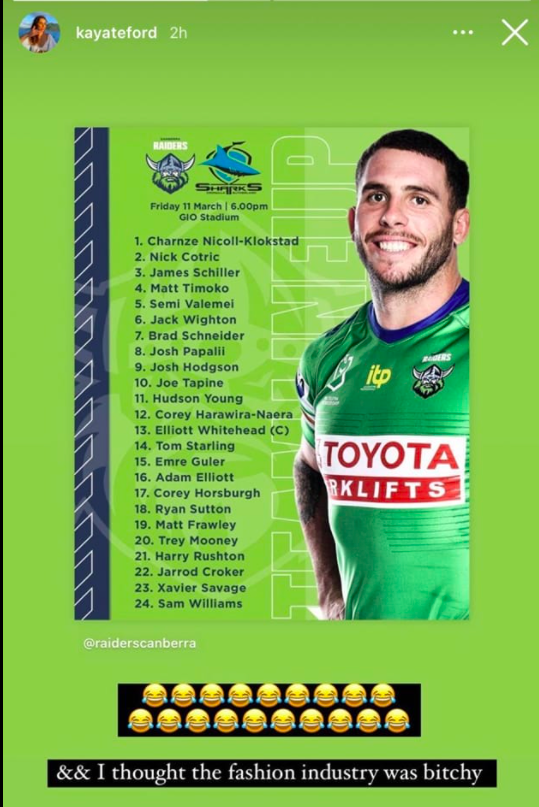