Channel 4 coverage has been hailed this year as something entirely different to the normal set-up of Sky Sports live rugby league.

With a fresh new punditry and commentary team in the shape of Adam Hills, Leon Pryce, Danika Priim and Mark Wilson, the coverage has been getting rave reviews from all those who have tuned in.

And, the numbers have been superb; Leeds Rhinos’ home game against Warrington Wolves in round one drew in three quarters of a million and though this number has dropped, the amount is still comfortably well into six figures.

Wigan Warriors hosted Salford Red Devils last weekend on Channel 4 on a Sunday with kick-off at 1pm, but viewers will have to wait until Saturday May 21st for their next terrestrial TV fix when Hull KR host Catalans Dragons.

It will be the first time that both of those sides have been broadcast on Channel 4 in 2022 as the broadcasters attempt to get round all the Super League sides.

At the beginning of the year, Channel 4 only gained access to ten Super League games – including play-off matches – but that will surely change from 2022 onwards with how well it has been received.

In fact, when Serious About Rugby League asked their Twitter followers should there be more Channel 4-covered games, there was an emphatic 98% of people favouring more fixtures on the terrestrial program. 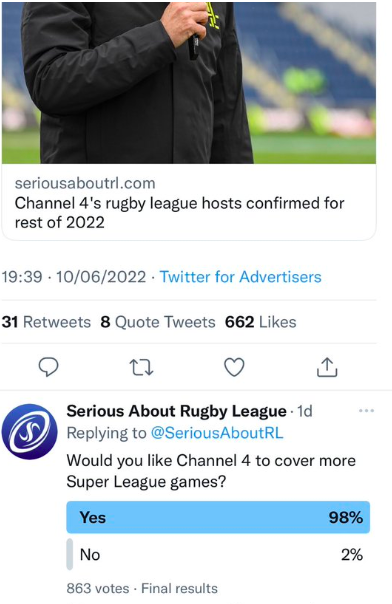 Only three more regular season games will be broadcast on Channel 4, but the dates for the two play-off games have been revealed.​

Saturday 10th September will host one Super League play-off with the time yet to be confirmed as 3rd takes on 6th or 4th goes up against 5th.

​Then, the second week of the play-offs will be held on Saturday 17th September as 1st takes on the lowest-ranked side or 2nd does battle against the highest-ranked side with Sky having first choice.