What a weekend of upsets! If you picked the round, give yourself a medal then book yourself in to the nearest loony bin as you’re either crazy ape bonkers or channelled Nostradamus via a ouija board to tip that lot, and no you’re not crazy, yes the Dragons are on top of the table after thumping Manly, not without controversy. Did Cherry-Evans push Nightingale or vice-versa? Who cares, Gareth Widdop was not square at marker anyway, but it’s all fish & chip wrapper now. The Broncos belted the Roosters, the Bulldogs knocked off the Knights, the Bunnies peeked past the Panthers and the Raiders smashed the depleted but not disheartened Titans. Ivan Cleary’s Tigers left Townsville with the two most unexpected points gained this season, while Kieran Foran inspired the Warriors as the Eels departed the Shaky Isles feeling like the referee who collided with a Semi-trailer carrying the number plate Radradra. Cronulla ended Melbourne’s unbeaten start in the GF rematch. The 11-2 score line was quite apt as the Storm played the Sharks in torrential rain more suited to water polo than rugby league.

Ivan Cleary took the wheel of his new bus and drove his unfancied rabble away for the hardest road trip in the NRL and the Tigers turned it on big time! They threw the ball around, defended their line with grit and put in for the full 80 minutes. Mitchell Moses, picked his toys up, put them back in the cot and produced a cracking game. The celebration at fulltime was of Grand Final winning proportions. Cleary’s task is to eke out a replica of that next week and beyond. Keep this up and the Cleary bus will have so many players on board they’ll be sitting on the roof resembling the Delhi to Chennai Express.

QLD Origin coach Kevin Walters must have had heart palpitations watching Johnathan Thurston limp off lame in the dying stages of Saturday night. The calf injury suffered by the Cowboys star sees JT in serious doubt for Origin I and joins Matt Scott and Greg Inglis in rehab, where Walters will be if any other of his Origin stars go down! Bookmakers have moved NSW chances in from bugger all to slight. The plethora of injuries may force the Maroons to fast forward the regeneration process and hand debuts to young dynamos like Coen Hess, Anthony Milford and Dylan Napa.

After a fantastic start to the season, the Roosters are in freefall. The past two performances have been reminiscent of last year’s effluent effort. The Chooks are an opponent’s best friend as they give penalties away generously, push poor passes and missed tackle counts rise like Trent Robinson’s cortisol levels. The Roosters were rancid and the Chook pen needs a clean. They have a mild case of bird flu but fortunately for them it is treatable. The Roosters are well placed but Dr Robinson must address this ill-discipline now or the feathers will start falling away like their season may.

The rugby league the Broncos displayed against the Roosters was breathtaking. Rapid ball movement, changing angles, the speed of both attack and defence choked the Chooks. It was pleasing on the eye and the final score line flattered the flattened feather dusters, it could have been fifty! The Broncos bombed plenty of chances and Anthony Milford was denied a brilliant try by a touch judge finally finding their voice and calling a forward pass that ironically was a foot backwards. If the Broncos keep this show stopping entertainment up, they’ll crack the top four and Wayne Bennett may even crack a smile.

Andrew McCullough is in career best form, he was sensational against the Roosters, but one of the beauties of this bloke is that he replicates this high-quality performance each week. Wayne Bennett must love knowing he can write McCullough’s name next to the No9 in permanent marker at the start of each season. McCullough is as tough as they come, never misses a game or a tackle, gives excellent service out of dummy half, kicks 40/20s, scores the odd try and most importantly never gives up! His crucial chase and ankle tap on a try bound Michael Gordon typified everything about Andrew McCullough. 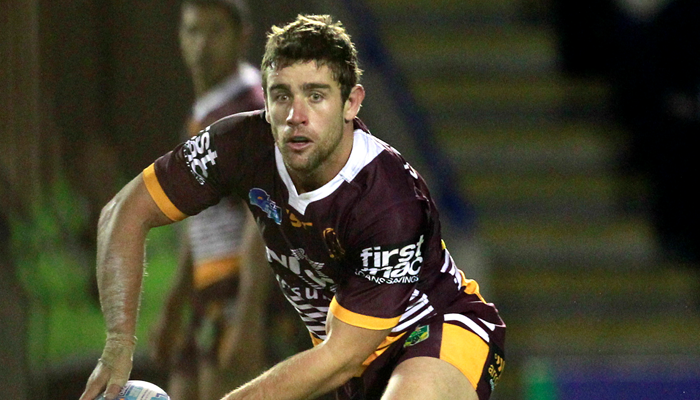 Back to Back Bulldogs

It wasn’t pretty, it rarely is with the Bulldogs, but the win over the Knights has them moving up the table. Consecutive wins in such a tight competition is considered gold and the Bulldogs will want to continue this roll. Des Hasler has some big decisions to make though as once again it was rookie Matt Frawley who sparked the Dogs on the back of great yardage gains from James Graham and Sam Kasiano. Brad Abbey’s concussion forced a reshuffle to the side, shifting Frawley to half and immediately the Bulldogs looked better. Frawley’s composure compliments Josh Reynold’s hyperactivity. Hasler runs his fingers through his luxuriant locks and looks in the mirror, its decision time Des, then runs his fingers through his hair again. It’s an impressive mane.

The thrilling one point loss to Souths has left the pre-season premiership favourites jammed in the lower half of the pack. Though they have their excuses, injuries to key players and off-field discipline, the fact is the Panthers need to begin winning. There is no need for the mountain men to head for the hills as the talent laden side have the ability to get on a streak. Once Anthony Griffin has a full squad at his disposal the Panthers will pounce and claw their way back into contention. Skipper Matt Moylan will return on a mission for forgiveness for his ill-disciplined omission.

Braidon Burns attempting to catch Nathan Cleary’s cloud bursting bombs was car crash TV – you didn’t want to watch but couldn’t look away. Cleary’s amazing technique produces kicks that enter the upper atmosphere and come down wobbling like a dodgy wheel on a shopping trolley. Poor Braidon was all at sea and couldn’t catch a cold let alone the ball so it rained bombs all night. The wry grin Burns gave Cleary at fulltime was an admission of ‘too good’, Cleary may have won that battle but Burns won the war as the Bunnies got the chocolates. Burns will have nightmares all week starring Cleary, I hope Burns plays a blinder next match if he can prise himself out of the foetal position and onto the paddock.

The Dragons dismantled the Sea Eagles and can no longer be considered flying under the radar. They are playing brilliant footy and reproducing that high standard week in week out. High completion rates combined with attractive footy and punishing defence, the Saints are marching in time to the same beat and the rhythm is hypnotic, gaining respect and admirers in droves. Once again Gareth Widdop starred, his wizardry stunned the Sea Eagles, while Euan Aitken lit up Lottoland. There’s a tough road ahead in the next month but it’s the opposition who should be looking over their shoulder, the Dragons fear no one in this form.

The Green Machine rolled into the Glitter Strip and left it in tatters. The Raiders tore the Titans to shreds as only they can. It was exhilarating and turned the two points into a formality and the game into an exhibition. The Raiders wound the clock back to late last season’s form. They were red hot and are warming up nicely for another tilt at the title. Jordan Rapana was superlative yet again, had a hat-trick within a heartbeat and his interplay with Joey Leilua on the Raiders rampaging right side terrorised the Titans. Ricky Stuart has amazing array of talent he just needs to harness it. The sky is the limit as long as they keep their heads out of the clouds and feet on the ground.

We are around a quarter of the way through a season that is proving as stable as Donald Trump’s finger hovering over the red button. Further complicating matters, injuries are starting to rear its ugly head as Ben Hunt joins Jonathan Thurston as another key playmaker on the sidelines. The unpredictability of the NRL just went up another notch. My 4-year-old daughter tipped 7 out of 8 this round… she will be ‘assisting’ my preview this week!