The NRL Indigenous Round featured ceremony, celebration, controversy and comebacks! It is turning into one of the most special rounds on the NRL calendar and the football on display was as remarkable as the Indigenous peoples it honoured.  The Cowboys upset the Bulldogs, the Sharks outlasted the Dragons in the southern Sydney derby while the Rabbitohs tore apart the toothless Tigers. Saturday saw a trio of tremendous turnarounds as the Panthers came back from the brink to wallop the Warriors, the Titans toppled the Storm and the Broncos mauled Manly in the second half. Sunday saw the Knights rattle the Raiders and the Roosters ripped the Eels pieces.

“Newcastle, Newcastle, Newcastle!” The chant hasn’t been belted out with this ferocity since 1997 when the Knights, Andrew Johns and Silverchair all topped the charts. The Knights were led superbly by two try hero Sione Mata’utia and steered expertly by the talented Brock Lamb, who silenced the Raiders fans who did travel with a dynamic display. They would have enjoyed singing the team song for only the second time in 27 games. No one remembered the words but luckily Nathan Brown has them tattooed across his shoulder blades. He also has D-O-N-T tattooed on his right knuckles and S-L-A-P on his left. The only thing a happy Nathan Brown slapped was backs. The victory will be celebrated strongly by the success starved Novocastrian fans, there’ll be balloons and streamers everywhere and the butchers will have red and blue coloured cuts in the shop window. The Joey Johns rump is expected to walk out the door – sideways.

The Green Machine needs a grease and oil change. The Raiders rancid loss left Ricky Stuart feeling as green as the Raiders jerseys, the rump choice for lunch not a good call. Things just aren’t clicking, the Leipana lucky charm has lost its lustre and the Raiders need to turn around their fortunes fast. They were out-enthused which will sting Sticky Stuart the most. That’s three losses in a row and training this week will not be for the feint hearted. Once again the halves didn’t organise, they need more marshalling from Aidan Sezer and Blake Austin.  Josh Hodgson was a bit off, heavily marked by the Knights ruck, which left the Raiders a rudderless rabble.

Do I need glasses? I’m seeing so many forward passes being let go that I must reschedule my next optometrist appointment. The Sharks scored at least two against the Dragons from what I’ll diplomatically call suspect passes. For Dragons fans I’ll be less diplomatic – they were more forward than a hillbilly living solo in the mountains cutting loose on his annual trip to the local Honky Tonk Bar. There are countless others every weekend, mostly let go. Tom Trbojevic threw a pass that Jorge Taufua caught in the next postcode the ref blew his whistle not to call play back but hand Manly four points. It’s NRL not NFL! I won’t just blame the referees, let’s face it they’re busy and there’s only two of them on the field but they have help supposedly, what are the touch judges doing? Why do they not see these? Don’t be shy it’s called a flag, use it.

"Not having that" - Robbie Hunter-Paul fumes over bizarre penalty

No one could have predicted the blow out winning margin but it was definitely no surprise that in Indigenous Round it was Blake Ferguson and the ‘rested’, recalled and rejuvenated Latrell Mitchell who blew the Eels out of the water.  The Roosters were red hot and were smoking from the outset, by the time the air cleared the Chooks were long gone and this was the one match of the round that no comeback was happening. On the back of mountains of momentum Luke Keary and Mitchell Pearce were monumental. To add salt to the Eels wounds, super star Corey Norman limped off and his gait mirrored the Eels effort, limp.

Super Saturday was one of the most amazing ever seen in the NRL. All featured comebacks, none more brilliant and jaw dropping than the Panthers. Needing to begin their climb up the table like, now, the Panthers fumbled and bumbled their way through the first half finding themselves down 28-6 at oranges. Staring the end of their season in the face, and sitting at the bar of the Last Chance Saloon, the Panthers must have drunk from the elixir of life because they suddenly produced the goods big time. The Warriors must have felt like a tsunami struck them as the Panthers scored five unanswered tries, to come from the clouds to score the most incredulous victory at the most miraculous moment. This may be the half of footy that sparks their season. 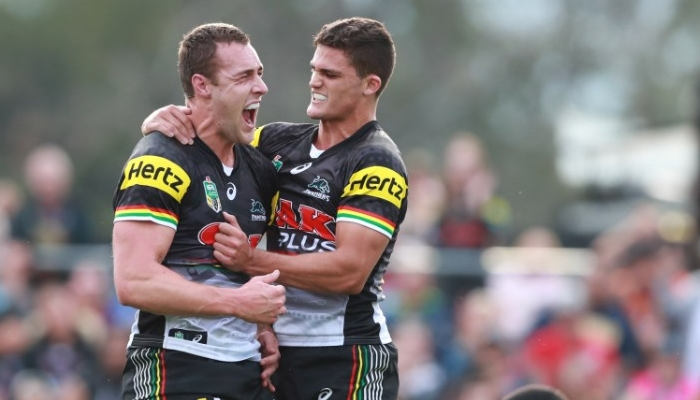 I must admit I think I have a man crush on the Titans. You cannot help but admire this side. They once again faced adversity, a lopsided scoreboard and the competition heavyweights yet somehow stayed in the fight and came out on top. It was a phenomenal performance worth ringside top dollar. Injury ravaged again, they finished with just the lone player on the bench. Why does this keep happening to the Titans? Neil Henry needs to visit a witch doctor and get this curse reversed. In saying that they seem to thrive on the disadvantage, it has built courage and team spirit. They just never gave in, copped the Storm’s best shots, dragged themselves up off the canvas and kept throwing punches landing the knockout blow in the dying stages of one of the most pulsating games of the year.

He may have ended up on the losing side but Billy the Kid is well and truly back. Slater was sensational and has his spot in the Queensland Origin side locked in. After slowly finding his feet after a long time out of the game, Slater showed he has lost none of his trademark speed and positional sense. His combination around the ruck with Cameron Smith and Cooper Cronk was at its breathtaking best and threatened to tear the game away from the Titans. Slater’s timing that was understandably off in his first couple of games is back on BMT – Bellamy Mean Time. Though Bellyache will be extremely displeased at the defence and loss, underneath he’ll be smiling that his man at the back is back!

Oh dear what was that Canterbury? This was the Dogs of snore, not war. The week off Des gave his Bulldogs in Rep Round came back and bit them on the bum. They were terrible and regressed to the team that struggled in the early rounds so much that Des Hasler was checking out plan B – take the reins somewhere else. Plan C was Des and Wayne Bennett telling hilarious coaching stories touring their show called ‘Grumpy Old Men’. The Bulldogs fluency that had been growing was lost in the old ponderous plodding football of two months ago, their rhythm and mojo went AWOL. Lay the blame as either: A) the week off; B) Josh Reynolds out, missing his energy and enthusiasm; C) one of those days; or D) all of the above. Choose your own adventure. I’m plumping for D. Ball work at Belmore this week will be about as much fun as the planned double act comedy routine.

The sin bin was in vogue this round with referees simultaneously growing a pair and deciding enough was enough and binning a few sinners. Whether a directive from above I don’t know but who cares, it’s about time and it was good to see. The man who surprised me most was Matt Cecchin. ‘Chicken Legs’ Cecchin not only sinbinned Ray Thompson but on being confronted by Cowboys skipper Gavin Cooper, stood up to Cooper and threatened to bin him too in such a stern tone I thought it was Bill Harrigan giving Gorden Tallis a towelling down in Origin. I had a tear in my eye remembering fondly ‘Hollywood’ Harrigan’s authoritative style and I think Gavin Cooper may have shed a sneaky one too after being torn a new one by ‘Chicken Legs’. As for the sin bin I am keeping my ‘Revive the Five’ call alive, ten minutes is too long. A five-minute sin bin will be used more often by the whistle blowers and may stem the endless flow of penalties being given away by defending teams on their own goal line.

The Cowboys rode into Sydney with a major point to prove. No Jonathan Thurston, no chance has always been the mantra. The Cowboys performance was five-star and a two finger salute to the doubters. Their pride had been pricked, none more so than Michael Morgan’s who led the team superbly. He had his finest match of the year by far and produced a game that JT himself would have nodded in approval. Morgan’s timing was spot on as Origin looms and he would love to hang onto that QLD bench spot that has been his for the past couple of series. The key for the Cowboys and Morgan is replay that display as the Cowboys need to keep in touch with the top teams during Thurston’s absence and Origin.

What a wonderful initiative the Indigenous Round is, it grows with importance and popularity every year. Indigenous players have brought so much to our game, Beetson, Meninga, Inglis, Thurston, just to name a few, have been giants of our game and have inspired people of all races with their sparkling play, internal and external strength, immense pride in their jersey and the people they represent.

Hard to believe our Indigenous people weren’t recognised as Australian citizens until 1967. The Stolen Generation only got an apology in 2008. In saying that Donald Trump got elected in 2016, so maybe it is believable.