Only a couple of weeks ago I was raving about Widnes and their electric performance against Leigh. Now, however, it seems they’ve completely lost that spark, after suffering a horrendous 40-0 defeat to Huddersfield on Friday.

Denis Betts has had the weekend to diagnose just exactly what went wrong for his side but one notable absence was that of maverick halfback Rangi Chase, who was suspended. One man doesn’t make a team, but Chase’s influence has had a big impact on the Vikings since his arrival. On the flip side, Warrington completely changed their fortunes on Friday, coming away with their biggest win of the season against Leigh. After a nightmare season, Tony Smith’s side look to be hitting form at just the right time.

A couple of months ago I criticised Warrington and St Helens for dropping their respective young halfbacks following some sour results. So wasn’t I pleased to see Declan Patton and Danny Richardson back in action on Friday night.

Both players were recalled – Patton through a squad reshuffle and Richardson for the injured Matty Smith – and played huge parts as both their sides notched up much-needed wins. The Wolves demolished Leigh 50-10, with Patton being one of the main orchestrators. While, live on Sky Sports, Richardson played a huge part in Saints’ 19-12 win over Hull. The 20-year-old tormented the black and whites all night, manipulating them with his good decision making and solid kicking game. Performances like this should surely mean the youngsters both keep their starting spots.

Saturday was a monumental day for the Toronto Wolfpack and Canadian Rugby League as a whole. During their 62-10 win over the Gloucestershire All Golds, the Wolfpack gave a debut to young Quinn Ngawati, who became the club’s first Canadian born and raised player.

At just 18-years-old Ngawati has had to wait for his chance, finishing off his college studies before joining up with Paul Rowley’s side last month. But despite the delay, the young standoff/back rower showed some good touches. He’s still very raw but has an athletes build and, with some good technical coaching, could become a real star in the future. It’s also worth mentioning the attendance at Saturday’s game. 7139 people flocked to the Lamport Stadium, with their lowest attendance all season being an impressive 5646. With these ever-rising figures and a Canadian debutant this weekend, Toronto are going from strength to strength.

One of the most anticipated games of the weekend was the battle for second place between Salford and Leeds. But any fans hoping for a tight contest will have been bitterly disappointed, as the Rhinos ran away 50-24 winners. 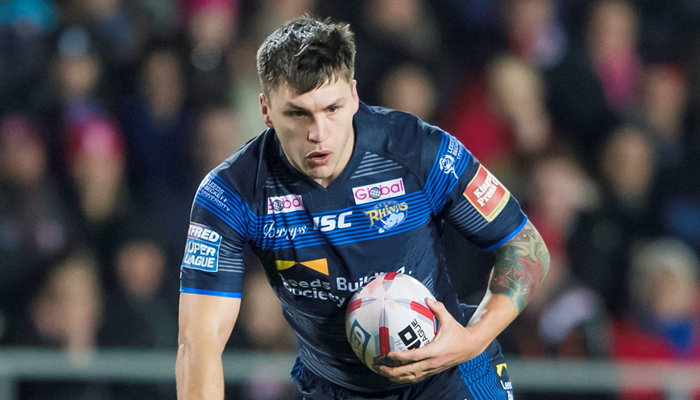 A first half blitz from the seven-time champions effectively sealed the game there and then, with any hopes of a Devils fightback dashed after second half tries from Anthony Mullally and Jack Walker. Salford fans will no doubt be disappointed with such a poor performance, especially in a game where they could have really stamped their authority going into the Super 8’s.

…but Red Devils strengthen with ‘The Beast’

The towering winger brings some much-needed star quality to the Red Devils and could prove a very handy acquisition as they prepare for their very first Super 8’s. For those who don’t know Vatuvei, he is fairly similar to former Bradford star Lesley Vainikolo. He has the build of a forward but the speed of an outside back, scoring numerous tries by simply powering over his opposite number. His try-scoring record in the NRL speaks for itself and if he can recreate that in any way in Super League, then Salford could be a huge threat over the next few months.