Each year, there are claims of whose derby is the biggest from rival fans in Super League.

Hull FC and Hull KR fans are determined to get their point across that theirs is the most fierce, whilst St Helens and Wigan Warriors supporters reference theirs as being the ‘original Derby.’

There are a number of other derbies within the top flight, as well, which certainly enjoy a great deal of reputation including Leeds Rhinos’ clash with Castleford Tigers and the Tigers’ fixture with Wakefield Trinity.

When Widnes Vikings were in the Super League, their derby against Warrington Wolves was also a fierce one to debate, whilst Bradford Bulls and Leeds regularly had an incredible match up whether under the bright lights of Odsal or Headingley.

Very few have come along though and claimed that Catalans Dragons and Toulouse Olympique now hold the biggest Super League derby status – except from Catalans fullback Sam Tomkins.

Though he knows what the Wigan-Saints derby means, the England fullback posted on his Instagram story something which will definitely have baited a number of people.

Tomkins wrote: “Looking forward to the best derby in SL tomorrow,” with the French flag emoji proudly displayed next to the caption. 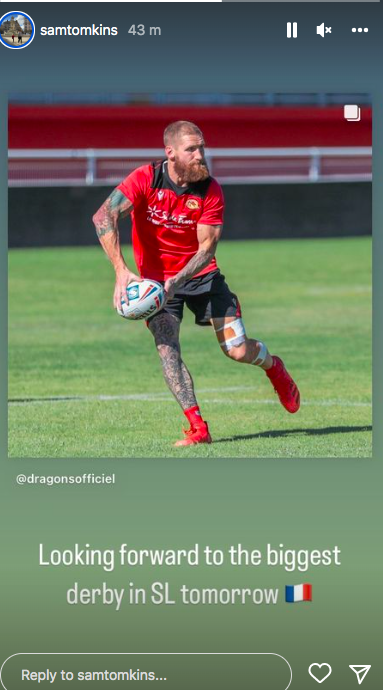 Tomkins will be hoping to help Catalans entrench themselves in the top four after a number of inconsistent performances in recent weeks – though they haven’t exactly been helped by injuries to a number of their key men.

That being said, if the Dragons do end up overcoming Toulouse, it will signal the end of the latter’s stay in Super League after just one season.

However, if passionate chief Cedric Garcia and president Bernard Sarrazain are anything to go by, the French side will be trying their damnedest to reach the promised land once more in 2024.