Another step in the right direction

Next week’s final test match may now be a dead rubber, but it’s certainly a very positive outcome from an England perspective. While both games were agonisingly close, it’s fair to say England were the better team and put in dominant performances that proved way too much for a strong Kiwi side.

It’s a massive stepping stone on the back of last year’s impressive World Cup run especially in terms of building for the 2021 competition. The team is in the best place it has been in years, while we have an experienced coach who is keen to give some international rookies a chance. It’s still early days as far as World Cup ambitions are concerned but it’s a brilliant starting point.

Some absolute quality #MondayMotivation for you ?

The game of his life – @TommyMak21 with a Test series winning hat-trick ??? pic.twitter.com/cKDoDi8p6l

If there were any doubters about Tommy Makinson’s place in the England squad, they were quickly silenced on Sunday afternoon. The St Helens winger played an absolute blinder, scoring a superb hat-trick and making some quality try-saving tackles, not least the two on Jordan Rapana and Kevin Proctor early in the first half.

The 27-year-old’s form during this test series has given Bennett a real dilemma going forward. Makinson was arguably England’s third choice winger before last week, behind Jermaine McGillvary and the injured Ryan Hall, but has now forced his way up the pecking order. Add the likes of Tom Johnstone, Josh Charnley and Tom Davies into the equation and Bennett has an embarrassment of riches at his disposal. The big aim for all those players will be the 2021 World Cup and Makinson has shown that positions are all to play for at this stage. 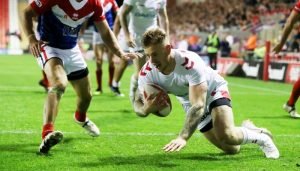 The test series win takes all the pressure off the England squad for next weekend’s final game at Elland Road. With nothing but pride to play for, it would be the perfect time to blood some of the players that have yet to get an opportunity this autumn.

In Bennett’s squad, only Joe Greenwood is yet to make his England bow, while Tom Johnstone and Reece Lyne have only the friendly against France to their names. For me, all three should definitely be included. Greenwood should be in as a direct swap for the injured Daryl Clark, Johnstone should replace Greenwood while Lyne should come in at centre with Jake Connor getting a shot in the halves. At the end of the day Bennett has nothing to lose, so it’s definitely worth a punt.

I find Wakefield’s signing of Huddersfield scrum-half Danny Brough rather bewildering. Of course, he’s an experienced player that has bossed Super League for years at the various West Yorkshire-based clubs he’s been at but what will he really add to Trinity that they don’t already have?

Jacob Miller and Ryan Hampshire’s combination really started to blossom midway through this season, with Trinity racking up some impressive wins when both hit form. New signing Ben Reynolds is a solid enough backup for those two, while young reserve half Tom Schofield looks a handy player. Either way it’s difficult to see how Chris Chester will fit everyone in. The likelihood is that Hampshire will be pushed out by yet another club, which is the last thing he deserves after killing it in 2018.

On the back of last year’s World Cup, many would have considered Wales as the weakest side in the 2018 European Championship. John Kear’s side, however, have the chance to finish second and qualify for the 2021 World Cup should they beat Ireland in Wrexham on Sunday.

They thrashed Scotland 50-12 at the weekend and it seems their long-term halfback problem could finally be solved. Young Rochdale stand-off Elliot Jenkins and Aussie native Josh Ralph combined superbly all night, with Jenkins’ try being the pick of the bunch. Factor in some of the Super League stars Wales are missing and the side could be their strongest for years. Should things go well on Sunday, I’m sure Kear’s focus will be straight onto finding eligible players for 2021.