Jacques O’Neill has been a busy man this past fortnight, sunning himself in the Love Island villa.

After being granted a release by Castleford Tigers to ‘pursue other opportunities’, that opportunity was revealed in the shape of ITV2’s Love Island last Sunday.

The 23-year-old made an entrance into the villa, sweeping Welsh wonder Paige off her feet before his occupation as as rugby league player was revealed.

Of course, that was a focal point of one episode last week when one of the new ‘bombshells’ Jay came in taunting Jacques by saying he ‘looked small for a rugby player.’

That prompted O’Neill to threaten the new Scottish boy to run at him and that he would ‘flatten’ him.

With that, it seems that Google has gone into overdrive with people searching the terms ‘Castleford’ and Castleford Tigers’.

The Yorkshire Post has revealed that searches for ‘Castleford’ or Castle Ford have more than doubled in search queries online, whilst searches for Super League club ‘Castleford Tigers’ have also experienced an incredible increase.

Season ticket holder at Castleford Tigers, a trustee of Rugby League Cares and chair of Castleford Heritage Trust, Jane Walton, said: “I welcome the inclusion of player Jacques O’Neil in this season’s Love Island. Anything that raises the profile of the area and the sport in a positive way is a good thing. I’d like to wish Jacques all the best and hope he returns to playing for the Tigers next season.”

Of course, O’Neill hinted on the program that he could return to rugby league once his summer hiatus on Love Island has finished.

However, it hasn’t been all positive for the former Castleford forward, with his mum revealing the amount of hate she has been receiving on behalf of Jacques’ appearance in the villa.

“People sending nasty messages to me, please can you stop it does hurt thank you.”

That prompted a whole barrage of support from viewers passing on their well-wishes to Janet and Jacques. 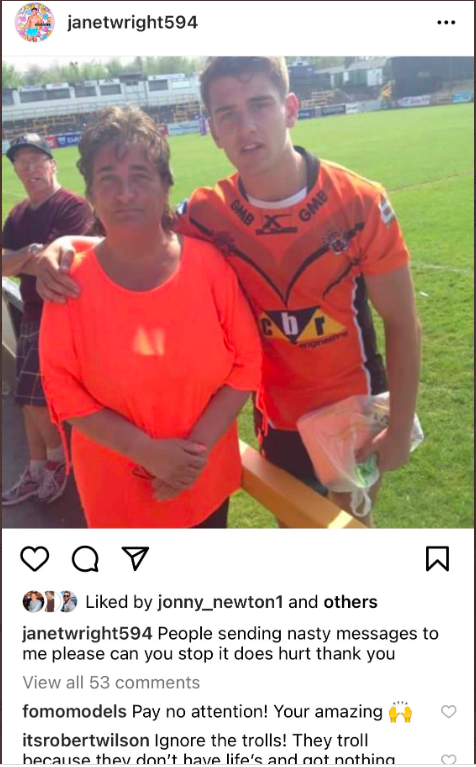