Widnes are in serious trouble

Okay, so we’re only one game into the Qualifiers. But Thursday’s game taught us two things: London could be promotion dark horses, and Widnes are at serious risk of relegation.

The Broncos were fearless and played with the kind of flare and enthusiasm of a side that are simply enjoying their rugby. Danny Ward’s body language mirrored that and while they may not have the same star quality as some of their counterparts, London’s ‘nothing to lose’ attitude could see them through to the Million Pound Game at least.

The same can’t be said for the Vikings. Thursday’s defeat was their 17th consecutive loss and while it was only a one-point contest, they were still lacking any structure, leadership or chemistry. Realistically, Widnes have to win at least three games to finish 5th and have a chance to stay up. I can’t see them beating any of the other Super League teams, while Toronto also look stronger. That just leaves Toulouse and Halifax, but even they will fancy their chances after finishing level on points with London in the Championship. It’s certainly a worrying time to be a Vikings fan.

Well, no one expected that result. St Helens suffered a rare loss to Huddersfield on Friday, which was their first consecutive defeat of the season after they were knocked out of the Challenge Cup by Catalans last week.

In all it was a fairly rough week for Saints. As well as the two defeats, there were again reports in the Australian media that superstar fullback Ben Barba has asked for a release to return home. Whether there’s any truth in it or not, it’s still a distraction they could do without right now. Justin Holbrook’s side certainly aren’t hitting their usual high standards at the moment for whatever reason and hitting a blip at this stage in the season could massively affect their title hopes. The side that wins the Grand Final will be the one who carries the most momentum with them to Old Trafford and at this stage, that isn’t Saints.

McNamara keeping his cards close to his chest 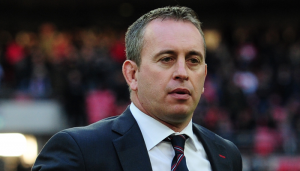 Okay, so the so-called ‘preview’ of the Challenge Cup final couldn’t have been more one-sided. Warrington put 10 tries past Catalans as they blitzed them at the Halliwell Jones with a convincing performance inspired by Kevin Brown. However, is this a true representation of how the sides compare ahead of Wembley? Not a chance.

The Dragons were without 14 key players and fielded a very young squad that included three debutants. Whether this was down to injuries or tactics, who knows? But either way, it was a smart move by Steve McNamara. Steve Price still doesn’t know how a full strength Catalans side plays against his team, while it was a good chance for some French talent to get a run out – halfback Arthur Morgue looks particularly impressive. McNamara has certainly changed his side’s fortunes in the past couple of months and this could be yet another tactical masterstroke. What’s for certain is that the result will be much different come August 25th.

Toulouse catching up with the pace

As heavy as the score-line between Leeds and Toulouse looked, it definitely flattered the Rhinos. The French side were in the game all the way through before being blown away late on, with the difference in speed and fitness seemingly catching up with them. Despite sitting at the bottom of the Qualifiers table, though, they’re arguably one of the most skilful sides in the competition.

Johnathan Ford with some brilliant skills to send Bastian Canet through for @TOXIII pic.twitter.com/52lkHRCUAe

The way they play and the tries they score were top quality. They have an almost fearless style and aren’t afraid to throw the ball around and take risks and even broke the Rhinos down on a few occasions with their offloading ability. The likes of Jonathon Ford, Mark Kheirallah and Con Mika are all catalysts that can spark their side into life. The positive for Sylvain Houles is that Leeds are probably the toughest opposition his side will face, so they’ll definitely have confidence going into the last six games. Their next opponents are Halifax and while it will be another tough, gritty game, they should come away with a win.

A weekend of debuts

As well as it being the start of the Super 8’s this weekend, it was also the start of some new careers too, with a number of coaches keen to blood some new faces. There were 11 debutants in total for eight different clubs: Arthur Morgue, Robin Brochon, Ugo Martin (all Catalans), Jordan Baldwinson, Sam Wood (both Halifax), Oli Partington (Wigan), Lewis Bienek (Hull FC), Suaia Matagi (Huddersfield), Charlie Gubb (Widnes), Joey Lussick (Salford) and Bodene Thompson (Warrington).

Of the homegrown youngsters, Partington and Morgue stood out. The former put in two huge stints that included a big hit on Adam Milner that got the Warriors fans off their seats. Morgue, on the other hand, was a silver lining in his side’s drubbing to Warrington and looks to be an elusive halfback with a smart rugby brain. As far as the four new respective recruits were concerned, all seemed pretty solid. Lussick bagged a try and looks to be a handy pickup for the Devils, Gubb and Matagi are heavy hitters and were very physical, while Thompson is a solid backrower that creates great competition within the Wolves’ ranks.