As much as it pains me to say it, I can’t wait to see Ryan Hall in a Sydney Roosters shirt. Super League’s loss is the NRL’s gain and if any player can restore some English pride as an outside back, it’s him. Our three-quarters have struggled to establish themselves in the Australian competition in recent years, but Hall has all the attributes to be effective. It’s often the physical demands that restrict Super League backs from excelling, but Hall’s bulky physique means he should fit straight in. He’ll also be playing outside explosive youngster Latrell Mitchell, which creates a very scary left flank.

On another note, Hall’s Leeds side seem to have turned a corner slightly, after getting their first win in seven games over Widnes on Friday. Other results mean that they’ll be consigned to the Qualifiers after next week but I can’t see them having many issues. Sinfield has already started to implement a new mindset and game plan which is apparently working, so they should breeze past most of the opposition they’ll face.

Unreal from the Rhinos ???@leedsrhinos keep it moving on the last with some sensational offloads & brilliant footwork to score an incredible try! pic.twitter.com/uyh9qjHZX5

Roby is a machine 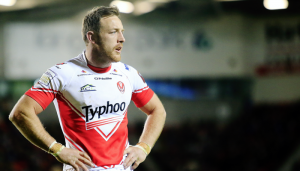 James Roby never ceases to amaze me. At 32 years-of-age, players often begin to hit the twilight years of their career but not Roby, he still plays like a teenager. The Saints skipper controlled proceedings on Thursday night, tormenting Wigan’s defence with his runs from dummy half and defending like a man possessed, making 49 tackles altogether.

Arguably though, what’s even more important is the leadership and experience he brings into the side. Having a hooker with his experience who can be that consistent for the full 80 minutes is an invaluable asset, and you can tell how much his form rubs off on his teammates. Saints’ spine are always singing off the same hymn sheet, no matter what combination they play and the forwards seem motivated to win the ruck and give Roby quick play-the-balls to work off. It would be an injustice if they don’t reach the Grand Final.

As well as Huddersfield’s inspired performance, one of the main things I noticed from Friday’s televised game was the performance of Greg Eden. The Castleford winger is still recovering from injury and put in a less than convincing showing, which is a far cry from what we’ve become used to from the 27-year-old.

He bombed two tries that would usually be pretty simple finishes for him, looked shaky under the high balls and refused to back his pace, instead choosing to slow and cut inside on numerous occasions. Daryl Powell would have been better off playing Kieran Gill or Tuoyo Egodo. Eden was just frustrating to watch, especially as a player with such natural speed and athleticism. He’s clearly not 100% and needs more time to recover, as he’s going to be crucial for the Tigers’ Grand Final push. A couple more weeks off or a game on dual-registration with Halifax would do him good.

Catalans in the clear

Fair play to Steve McNamara. He’s somehow managed to turn a struggling team with no direction or leadership into a side that can compete with anyone. Saturday’s win over Salford was the Dragons’ seventh win in their last nine games and secured their Super League survival.

? @DragonsOfficiel Fouad Yaha was on fire as he notched four tries against @SalfordDevils

What’s been key for the Dragons is their mid-season recruitment and that was again evident against the Devils. Josh Drinkwater and Kenny Edwards both stood out, getting three tries between them and having a hand in two others. The pair have brought a touch of flare to the French side and have inspired them to play more expansive, which is a style that really suits them. Now their Super League status is secured, McNamara’s attention will turn to next season, where they will be looking for a significant improvement on 2018.

Wakefield show they can be clinical

Catalans weren’t the only club to secure their top eight place at the weekend, with Wakefield steamrolling past Hull on Sunday afternoon. Chris Chester’s men came away with a 72-10 win, their biggest of the season, and ran in 12 tries against the Black and Whites.

While Hull were far from their best, the game still needed to be won and it gives Trinity great momentum going into the business end of the season. Jacob Miller was excellent after a relatively quiet season by his own standards, as were Ryan Hampshire and Kyle Wood who are forming a deadly creative spine down the middle. Friday’s game at Huddersfield will now give Chester a chance to take a step back and see where his side is really at coming up against one of the competition’s in-form teams. Neither side are under any pressure and can just enjoy playing rugby, so it promises to be one of the game’s of the round.