Going into their huge Magic Weekend clash today which could have a huge impact on both clubs’ play-off hopes, Leeds and Castleford are tussling with spine issues.

These aren’t back problems, but conundrums for Rohan Smith and Lee Radford to solve in their pivotal positions to maximise their ball playing ability hoping to stretch their opponents on a big pitch on a warm day tiring them out and playing attacking rugby like the conditions beckon.

Both sides will be without their first choice hooker with England hopefuls Paul McShane and Kruise Leeming absent McShane through suspension and Leeming through a foot injury.

This will no doubt see Adam Milner start at nine for Cas but Leeds’ hooker conundrum is much more complex. They have an outstanding nine in Brad Dwyer in their squad who has scored plenty of tries for Leeds in the past and is always a threat out of dummyhalf.

Admittedly he is better off the bench but also is Leeds’ most experienced option in the role with Leeming absent. However, the last time Leeming missed out – which came in defeat to Huddersfield where his absence was keenly felt – Dwyer started on the bench with Smith instead starting Jarrod O’Connor who has played a lot of rugby at hooker especially in recent weeks despite being regarded as a 13 by most.

Though he seems to be a nine in the eyes of Smith with the former Bulls boss selecting him over Dwyer on the bench recently and also over another hooker in young Corey Johnson who is highly thought of at Headingley and was awarded a new deal recently.

Dwyer’s absence has been a surprise with many believing he’s either not a player Smith likes – unlikely given the praise he gave him in his press conference this week – or has been left out due to taking up a contract elsewhere for next season with Salford seen as a likely destination.

Surely today he’ll play though in Leeming’s absence although if Smith is truly keen on looking at other options Johnson could get the nod.

However, all three could feature. This is because there is a rumour that Blake Austin is injured and that Corey Johnson – who has plenty of experience in the halves – could replace him especially after not featuring for Bradford last night.

It has also been rumoured that O’Connor will indeed start at nine as he did against Huddersfield and as we predicted.

In this scenario Dwyer would then start on the bench. If Austin were to miss out, Leeds could also look to 17-year-old Jack Sinfield who has stood up well this season or could shuffle their backs around with Richie Myler coming into the halves and Zak Hardaker back at fullback.

In this case the three nines could still all feature with O’Connor likely used as a 13 to make up for the fact Rhyse Martin would have to play at centre with Morgan Gannon at second-row leaving a lack of forwards on the bench unless Leeds turn to young Max Simpson at centre. 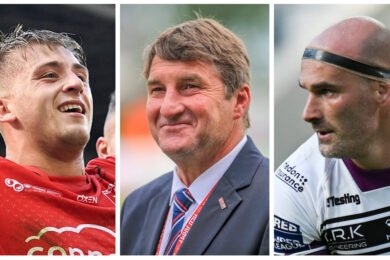