If ever there was a special moment in your life, it’s witnessing the birth of your child.

For Super League referee Chris Kendall that’s exactly what happened on Friday night as he announced on Twitter.

Unfortunately, with social media as widely available to everyone around the country and the world, there are a number of people that can’t resist taking things to extreme levels.

And, after welcoming his new child ‘Max’ into the world, Kendall was targeted by vile abuse. 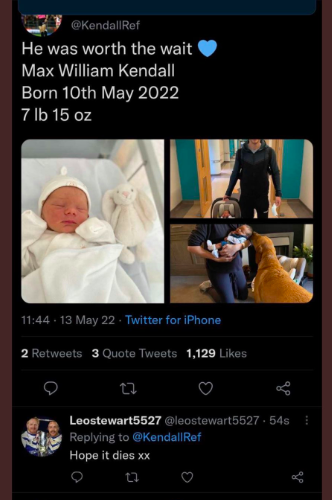 Kendall isn’t the only one to have been targeted by horrendous abuse.

Earlier in the season, Warrington Wolves were in a bad run of form.

With a losing run on their backs, the Cheshire club travelled to Hull KR where they were outclassed in a dismal performance.

However, following that game, winger Josh Charnley was targeted by vile abuse and death threats, something which he has now opened up on.

“We put our bodies on the line for this club,” Charnley said on BBC Breakfast.

“I don’t know why I was targeted it’s not nice to see that when you open Twitter and that’s the top comment.

“I don’t want to get comments like that and my family feeling like I was in danger.

“We were in a bit of a rut getting beat, when you check social media and that was there it shocked me at first – we don’t go out there to get beat.”

Charnley referenced how easy it is for people to say what they want on social media.

“At the minute social media is easy to direct contact with someone, so we’re trying to tackle that.”

Since then, Charnley and the offender have met where the winger put his thoughts across, hoping that the perpetrator takes his comments on board.