Phoebe Burgess has revealed she will be changing her name in a bid to distance herself from ex-husband Sam Burgess.

The 32-year-old social media influencer revealed her bombshell when she responded to an Instagram follower, asking why she hasn’t changed her name from ‘Mrs’ to ‘Ms’ on Instagram.

“Just curious: I get the desire to keep the same surname as your kids but have you thought about changing your Insta handle to MSphoebeburgess?” asked the member of public.

“Just because your nobodies MRS, and you are a kick a** independent woman??? This post is meant with support and kindness.”

Phoebe responded: “Thank you for asking and thank you for your candour/ honesty and support.

“Legally, I am Ms everywhere – On my IG it says “please contact support to change username”. So, yes it’s a process which I am well and truly in.” 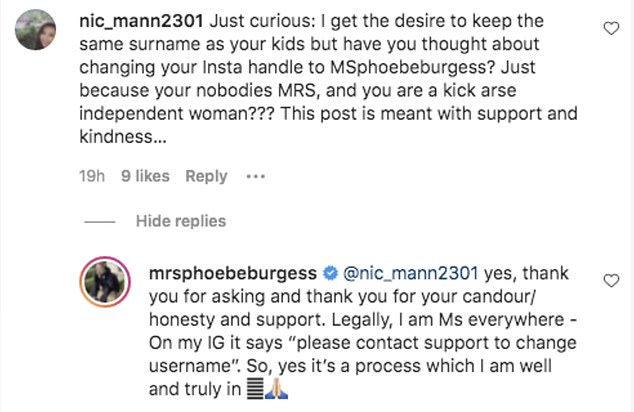 Burgess had been cleared of domestic abuse and drug abuse by New South Wales after Phoebe’s accusation, with the former South Sydney Rabbitohs forward continuing to maintain his innocence against domestic violence claims.

Sam had recently been the winner of reality TV show SAS Australia, but in the run up to that victory, Phoebe blasted the NRL for not doing enough to address Sam’s drinking and drugs problem and help him get better.

“There were things that the club knew that I didn’t,” Phoebe said. “I was kept in the dark in my own marriage.

“I want to challenge some very powerful people to look at their own behaviour, to look at the way they handled the situation, the role they played in all of this.”

Phoebe, in a video interview for The Weekend Australian, added: “I spoke to someone in the NRL the other day and said, I have been quiet a really long time. I’ve been almost complicit. I’ve actually been helping you do what you do.

“I’ve been there. I’ve heard things that are wrong and said nothing. I’ve helped make things go away, I’ve helped the cover-up narrative, I’ve been there for the toxicity. I’ve seen it. It’s not working for you and I’m not going anywhere.”

Sam has recently returned from Thailand where he was helping his friend and Hollywood director Russell Crowe on the set of a new film.