Former Castleford Tigers playmaker Ben Roberts has spoken out in support of Canterbury Bulldogs forward John Asiata who has had his contract terminated for refusing the COVID-19 vaccine.

In the wake of a lack of a competition mandate, clubs are taking their own action with the Bulldogs taking no prisoners in their attempts to gain a fully-vaccinated squad.

Asiata has not yet played a game for the Bulldogs after signing a one-year deal, but the Sydney Morning Herald has reported that the 28-year-old was handed a letter of termination as the week drew to a close.

The former Brisbane Broncos and North Queensland Cowboys prop is one of the few – alongside Melbourne Storm’s Nelson Asofa-Solomona – to speak out against the vaccine, with him revealing he would prefer heading into the construction industry rather than taking the vaccine and continuing his NRL career.

“We won’t have someone in our squad that can’t fulfil their contractual obligations,” Warburton said.

“And if they can’t fulfil that, then they won’t be there next year.”

State restrictions will hamper NRL players that are unvaccinated with only the AFL issuing a sport-wide mandate for the jab.

Roberts, however, feels there has been an injustice done, speaking out on an Instagram story as the growing debate divide worsens Down Under.

Roberts stated: “Measure a man not when he follows the crowd, but stands strong by his own morals & beliefs.” 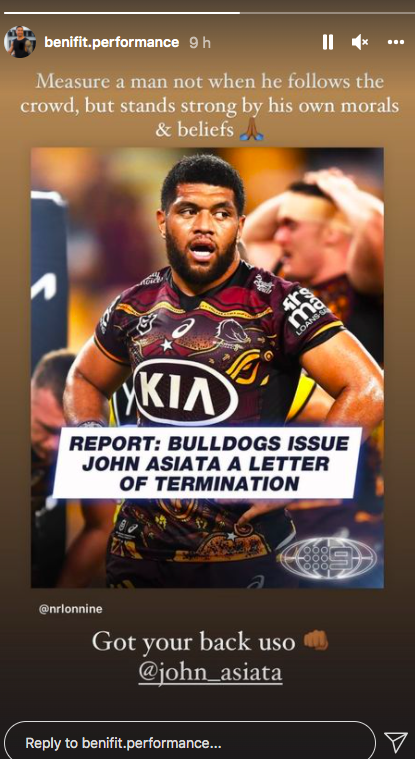