Josh Reynolds exited Hull FC back in June after a less than successful time in East Yorkshire.

Reynolds joined the Black and Whites from NRL side Wests Tigers ahead of the 2021 season and started that year like a house on fire.

Due to injuries and suspensions, the outspoken Aussie was once more in and out of the team as the likes of Joe Lovodua and Ben McNamara impressed in the halves.

However, since his exit, Reynolds has been in contact with his former side Canterbury Bulldogs and he will now rejoin the club where he made his name.

“He is a Bulldog. It’s a strange decision. I thought when he left the NRL that’d be it,” NRL hero Gorden Tallis said on Fox News.

“I haven’t watched him over there (Super League). Maybe he’s been setting the world on fire and he comes back with that energy we all know he’s got. The crowd loves him and those young kids at the Bulldogs will follow him.”

Reynolds isn’t getting any younger at 33, but his experience could have proved vital at another Super League club given the opportunity.

Of course, having been on a marquee contract at FC, it was unlikely that the halfback would have found another team in the UK that would be willing to pay his wages after a tough time at the MKM Stadium.

Having said that, Reynolds had been linked with a move to the Mount Pritchard Mounties – the Canterbury Bulldogs feeder team – but he will now in fact be a member of the first team.

Of course, Reynolds has often been labelled a hero at Belmore with the Bulldogs and was even named in the team of the century a few weeks ago.

That being said, General Manager of Canterbury – Phil ‘Gus’ Gould – has revealed that Reynolds has been in contact with the club for two months but will “assist in junior league &or community programs,” which may point to the halfback not actually running out in the blue and white jersey in 2023.

Gould tweeted: “I hate having to respond to rumours. But for the record. Josh Reynolds sent me a message from UK two months ago saying he was returning to Australia and that he’d like to assist in junior league &/or community programs. I told him to come see when he gets home. Thanks.” 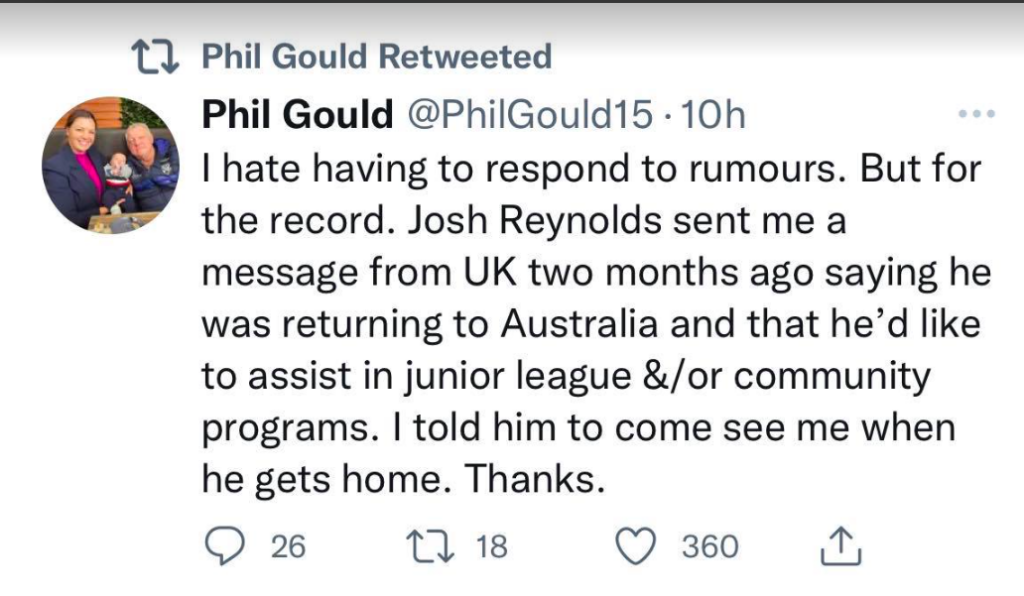