The name Andy Farrell is one that transcends both codes.

Famous in rugby league and rugby union, the former cross-code international was spotted at his former club Wigan Warriors in the day leading up to their famous Derby clash with St Helens.

It was an incredible affair with big hits, sublime skill and a stunning crowd of over 20,000 with the Sky Sports cameras continuing to flash to Farrell in the stands at the DW Stadium. 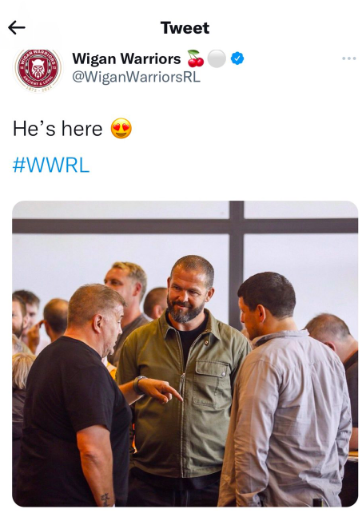 Meanwhile, Farrell has been making waves in the 15-man code with Ireland, finishing second in the Six Nations Championship in 2022 and winning the Triple Crown in the process with victories over Wales and England.

A week later, they were victorious once again in Wellington beating the All Blacks 32-22 to win the series and seal what has been hailed as the Irish’s best ever win in the history of rugby union.

Farrell enjoyed a superb career in rugby league, playing 370 games and registering over 3,000 points in what turned out to be a 15-year career in the 13-a-side code before moving to Saracens.

In 1996 Farrell was appointed Wigan captain and later that year, aged 21 years and four months, became the youngest-ever captain of the Great Britain team, leading the 1996 Lions tour of New Zealand, Papua New Guinea and Fiji. In October that year he won the most prestigious individual accolade with the Man of Steel Award that year.

However, at Saracens, the blockbusting forward suffered with injury, but he was still able to earn seven caps for England, adding to the 34 Great Britain caps and 11 England caps he was able to accrue in rugby league.