Both Mitch Clark and Chris Hankinson have departed the Wigan Warriors in previous days.

Clark has moved to the Newcastle Thunder, whilst Hankinson has gone French having secured a deal with Toulouse.

Since his arrival at the Warriors in 2019, Clark played 17 games for the Cherry and Whites, including eight in 2021 where he scored two tries.

After joining Wigan midway through 2018, Hankinson went on to make 23 appearances for the club, scoring four tries and converting 18 goals. He spent the 2021 season on a season long-loan with London Broncos.

But, Hardaker has paid tribute to both in a short but sweet statement: “All the best boys in your next ventures! Both be missed. Take care,” with a peace sign emoji just after.

It’s perhaps well-known that Hardaker had been good friends with Hankinson before the latter made the move to London, with the former now also back home in Pontefract. 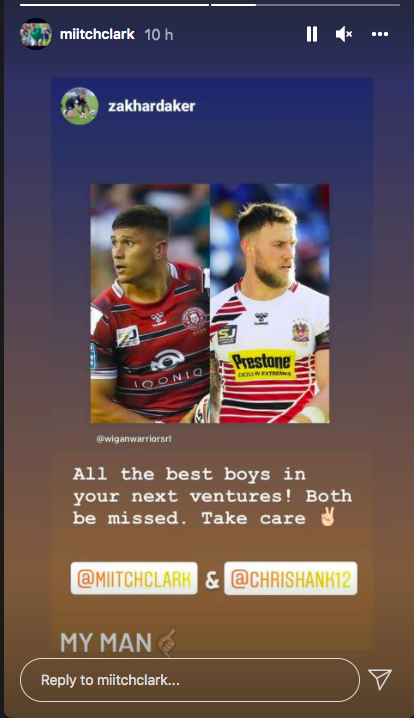 Born in Pontefract, Clark is of the son of former Bradford player Trevor Clark and has plenty of pedigree on his playing CV.

Playing Toyota Cup and Holden Cup level for Penrith Panthers, the 28-year-old cut his teeth in the Betfred Championship with Doncaster, Bradford and Hull KR, before making his move into Super League.

Signing for Castleford on a two-year deal, Clark made a total of 24 appearances for the club and bolstered these with games further games in the second tier for Featherstone Rovers and Halifax before a move to Wigan came about ahead of the 2019 season.

It was at the age of 20 that Hankinson made his debut with the Leigh Centurions in 2014.

The following year he signed for Barrow in the Championship, and took part in 22 games and scored more than 250 points.

In 2017, then 24 years old, he joined Swinton. After a good season with the Lions, the Wigan Warriors knocked on his door where he won a Super League Leaders’ Shield in 2020 and a Challenge Cup in 2018.