Leeds will be disappointed with the final score, but they were simply outclassed. Smith, Slater and co. put on a superb display, with young half Brodie Croft stepping up to the plate following Cooper Cronk’s off-season departure.

The Rhinos dominated the first 20 minutes, seemingly shocking the Storm slightly with their intensity in attack and defence. Ryan Hall and Kallum Watkins caused problems, while Adam Cuthbertson and Brad Singleton led from the front in attack. Once the Storm were in control, though, there was no stopping them and Leeds really struggled to keep up with their opponents’ speed and fluidity. It could have been a case of peaking too soon, as Leeds looked tired for the last quarter despite their exciting start.

The Storm are looking in peak condition ahead of their NRL season. The biggest test will be their halves partnership but fans should have nothing to worry about if Croft’s performance this weekend is anything to go by. Unlike some others young halves, he really took charge and wasn’t afraid to talk, even ordering captain Smith around on occasions. Playing games week-in, week-out is a different kettle of fish, but Craig Bellamy will be pleased with his side’s first hit out. 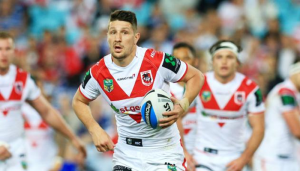 Hull FC came within a whisker of pulling off a major surprise, as a team of 13 graduates from their academy, along with some seasoned professionals, frightened the living daylights out of NRL side St. George Illawarra Dragons.

Without their three most influential players Danny Houghton, Scott Taylor and Mark Minichiello, the Black & Whites took the game to their illustrious opponents, led at half time, and deserved at least a share of the spoils.

Albert Kelly looked like a man on a mission to put himself firmly in the eyes of NRL scouts, and the move between Jake Connor and Greg Inglis’ cousin for the half back’s opening try was indeed sublime, while his second owed much to his deceptive strength.

There were moments of genuine quality from the team in the Red V, but many people would have expected a much bigger victory for the Aussie side, while Hull FC can point to a disallowed try for Jordan Lane, a player yet to make his first team debut in a competitive game, as controversially denying them at least a draw.

There was involvement from many on the fringes for both sides in a game that was dominated by youth.

Wigan got the better of the early exchanges with Sean O’Loughlin’s perfectly weighted kick giving Tom Davies a sniff of the line. Davies took his chance and Wigan charged into the lead just five minutes in. Wigan have started the season with a free-flowing attack which completely unravelled South Sydney just minutes later but Davies fluffed his lines with nothing to do but put the ball down. It proved costly, the next set George Burgess ran over two to put the ball down after a penalty helped piggyback the Sydney club up the field.

Hymel Hunt made a break and was pulled down by a great attempted tackle from Sam Tomkins but was judged to have not been fully tackled leaving a simple offload to winger Campbell Graham who could put the ball down with ease.

The Warriors down to 12, after Liam Marshall committed a professional foul, and having made changes to allow fringe players a chance at playing time couldn’t keep out a Sydney side that looked ruthless throughout. Kennar touching down for Australian outfit.

Davies made amends for his error earlier in the half with another try five minutes before the break, giving his side a chance going into the second half. Rotations kept coming in the second half for the English side and they never looked comfortable with a particular combination. Sydney took advantage of this and asked some tough questions of the oppositions goal-line defence.

The sides remained split by 4 points until the 76th minute. Nicholls hitting some tired defence got an offload to half back Adam Doueihi which left the no. 6 with nobody in front of him. He made the score 16-8 before the first successful conversion of the night made it 18-8. A gutsy performance by a Wigan side that now look forward to a trip closer to home for two competition points against Warrington.