However, cited in amongst those was Wigan Warriors forward John Bateman for an incident which occurred in the 28th minute of the Challenge Cup Final clash against Huddersfield Giants.

The Match Review Panel cited the England international as ‘intentionally’ standing on a Huddersfield player. However, he has not been banned because “Player puts foot down and immediately feels arm under his foot and takes the foot away.” 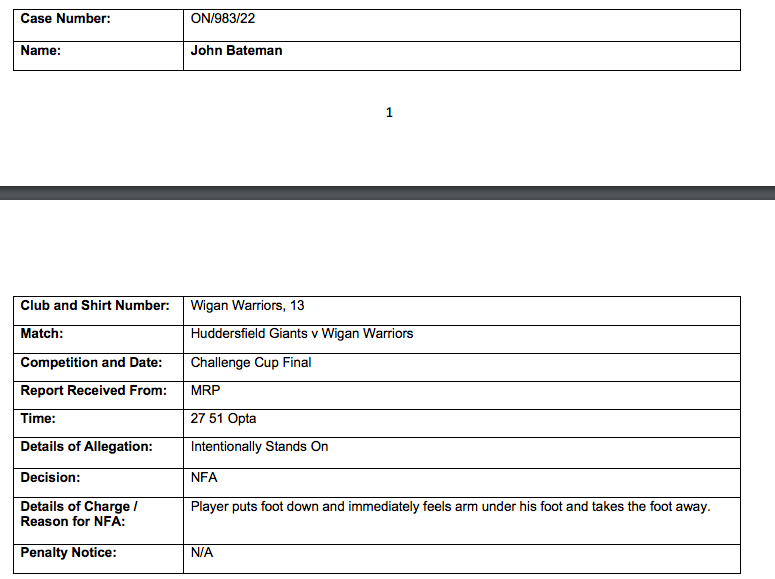 Remarkably, for Huddersfield only Luke Yates was cited with no other Giants player called before the Match Review Panel.

It was a very tense and cagey affair throughout the final on Saturday afternoon as over 51,000 made their way inside the Tottenham Hotspur Stadium for the first time in rugby league.

Only Tui Lolohea’s missed kicks – four out of five – kept Wigan just two points behind their opponents heading into the final few minutes, but a lovely kick by Warriors’ halfback Harry Smith enabled Liam Marshall to canter over untouched in the corner.

It broke Huddersfield’s hearts as Wigan supporters were on their feet.

Curious citation, I would have said.
On the one hand he is cited as intentionally standing on a player, but in the same breath it records “Player puts foot down and immediately feels arm under his foot and takes the foot away.”

Surely, that description is of an Accidental standing on a player?
Why did they bother?