The Disciplinary Match Review Panel was busy this morning and afternoon, running through every game from the weekend of rugby league action just gone.

And, following the latest round of Betfred Super League and League One fixtures, the Match Review Panel have issued the following sanctions:

There were, however, a number of notable citations that were not made into a charge not least the allegation of two head butts aimed at Wigan Warriors forward Morgan Smithies and Catalans Dragons man Tiaki Chan.

That being said, Smithies’ action was described as ‘Other Contrary Behaviour’ with the Disciplinary Match Review Panel’s minutes stating: “Player keeps head in tight, but does not head butt the opponent.”

Meanwhile for Chan, his allegation was an actual head butt, but the minutes state: “Player moves head into the chest of the opponent but actions do not amount to a head butt.” 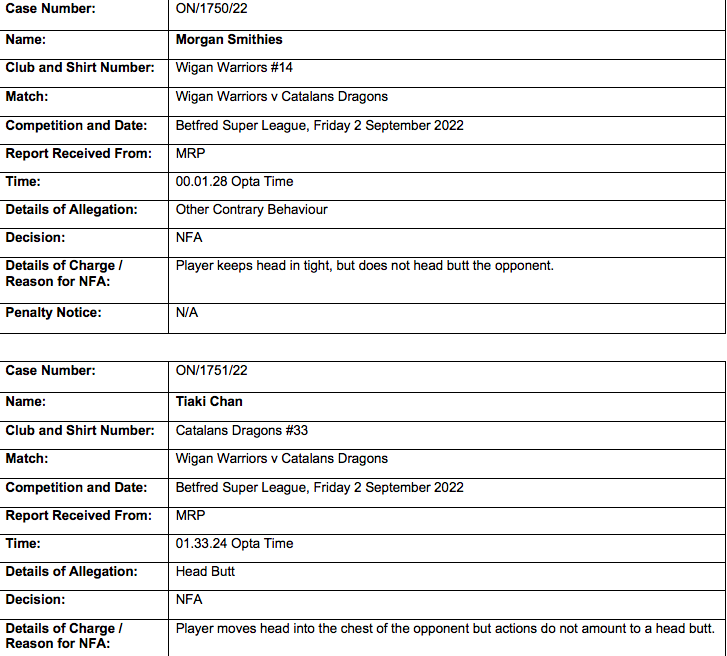 It bodes well for the play-offs that only one play-off side has incurred a ban this week and that is Leeds Rhinos star Rhyse Martin whose Grade A High Tackle means he will have to sit out Leeds’ trip to the south of France to face the Catalans Dragons on Saturday.

Of course, everyone wants to see the best players on the field at all times and this is set to be a festival of Super League on Friday and Saturday.