Four cards were shown – all to the Dragons and two of them to star halfback Mitchell Pearce – whilst referee James Child was pelted with missiles at the end of the game.

Mitchell Pearce, Gil Dudson and Dylan Napa have all received hefty bans, whilst no Leeds player will be banned for this week’s semi-final against the Wigan Warriors.

That is despite a number of flashpoints that occurred during the fixture involving Rhinos stars Matt Prior and James Bentley.

Prior was accused, by Catalans’ Sam Tomkins, of a headbutt, but the Match Review Panel has revealed that the Australian forward has no case to answer because: “Player gets up and walks towards opponent. Player does not throw the head backwards and then towards the opponent.”

That is pretty clear by the Match Review Panel that they feel like Prior and Tomkins’ coming together was just that.

Meanwhile, Bentley was caught in a number of tussles – not least with Catalans’ number nine Michael McIlorum – but he too was cited and not charged which will be music to Leeds fans’ ears considering their semi-final clash with Wigan this Friday.

The minutes state, on Bentley: “Player has hold of opponent’s shirt and goes down with the tackle. No intentional use of the elbow.” 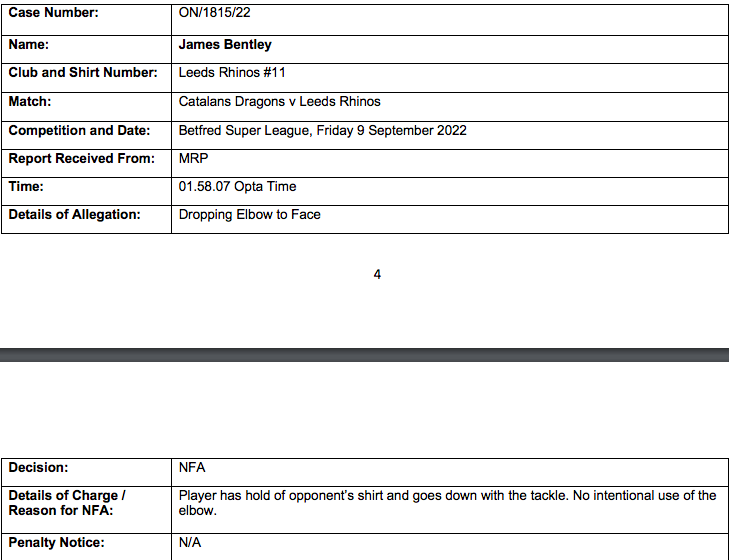 Leeds, of course, will be travelling to Wigan on Friday night hunting yet another scalp following that big win over Catalans last weekend with the Warriors enjoying a week off having finished second in the Super League table.

Matt Peet will be hoping the prognosis on halfback Cade Cust is not too bad considering the business end of the season is upon us, but there will be no Liam Farrell.