You think back to a time when the terraces of Odsal Stadium were packed to the rafters. Not any longer than a decade ago, around 16,000 spectators on a weekly basis flocked to one of Rugby League’s most iconic grounds to watch the Bradford Bulls. Now 10 years later, the West Yorkshire club are condemned to a life in League 1, with local clashes against the likes of Leeds Rhinos certainly a far cry away. For the last few seasons in the Kingstone Press Championship, derbies against the likes of Batley Bulldogs and Dewsbury Rams have seen them mostly come out second best. The Bulls will now contend with the likes of Keighley Cougars as their closest rivals.

There is few that could of predict the Bulls’ fall from grace over the next 10 years and you compare that number of 16,000 to the 2,500 or so that ventured to the game against Batley nearly two weeks ago. What happened to the other 13,500? The saddest truth is that the passion and enthusiasm that was once there seems to have just been lost in a sea of wrong decision making. Go back to 2012, when the Bulls kept their place in the Super League after acquiring new owners but with only half the money the other clubs got. Now this just seems like such a bad decision when the club still had its money troubles. A similar situation happened once again with the next owner and then we all know what happened after that.

One question that needs looking at though is, was keeping the Bulls in the Championship this season the best idea? Would Toronto or even allowing Whitehaven back in, have been a better idea? Legally speaking, they are a new club and rules suggest that all new clubs must start from the lowest tier of the RL. To make matters worse, being deducted 12 points before the season even began put a newly reformed Bulls in a near-impossible situation to get out of. Hindsight is a great thing but it is hard not to think once again the ball has been dropped on one of the biggest brands of the sport in its time, with decision after decision going wrong.

It could certainly be easier to write a book on where the problems first began for the Bulls. The fact that the club has gone through three administrations and a liquidation in the last five years tells you all you need to know about the constant mistakes being made. Back in 2003, Bradford became only the fifth club to become treble winners but now it looks as if the once formidable side cannot catch a break. 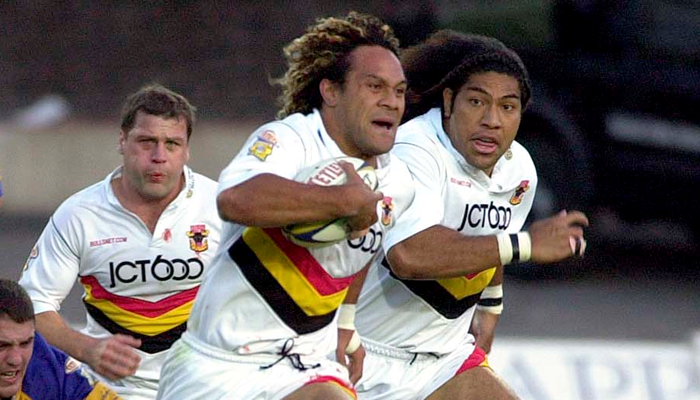 You would have expected the team on paper to perform better than they have this season. The lack of decent defensive sets seems to overshadow what they can bring in attack and the inexperience of a young team has led to a lack of leadership on the pitch. The signing Scott Moore has been a positive for the club and his experience has helped the likes of youngsters Ross Peltier and Sam Hallas, who have been two of the stand-out performers in a tough season.

Despite the negativity, there is still life in the club and that there is still a Rugby League giant that could awake at any moment. Looking back to earlier in the season and the spirited performance in the 19-18 loss to Hull KR over the Summer Bash weekend. Although they would succumb to a defeat, there was seemingly enough to show that the club can build on this. Looking inspired by the return and performance of half-back Dane Chisholm, the player proved to be a catalyst for such a gutsy Bulls display which saw him keep KR on their toes throughout the whole game. The ability was certainly there, it was just a question of utilizing it.

Throughout the whole season it would seem that lady luck has not exactly been on the side of the West Yorkshire club either. To add to a selection of heavy defeats, the Bulls had to deal with injuries to key players like Dane Chisolm and Ethan Ryan. Once again hindsight is a great thing. It can be easy to suggest where Bradford could be even with a fully fit squad but sometimes that is the way the dice roll.

Also, now, just as at the start of the season, with the liquidation and reformation under a new name, convincing players to stay is going to be top priority you can imagine. Not only that, another issue for next season could be the club’s combination of full-time to part-time players. Head coach Geoff Toovey has already revealed he is unsure what the ratio he will have at his disposal of full-time to part-time players come next season. Bradford can certainly take inspiration from the likes of Featherstone and Halifax, who have been able to build a side of last couple of years with a mixture of both kinds of players. Now, both clubs are competing in the qualifiers.

Still, this could have been that much more of a difficult transition if it was not for the new owners, however. Both Andrew Chalmers and Graham Lowe obviously have that knowledge and experience that can benefit the Bulls in the long term. Along with the fact that Toovey has already laid down his plans for the next season, it seems that the new owners see success in the future for the former Super League Champions.

If the Bulls could have stayed in the Championship this season there is no doubt it would be an almighty achievement for the club. But is relegation the worst option? Well it could be yes and no. It would certainly cement the clubs recent fall from grace even further to the lowest tier of RL, with two relegations in four years and putting the club into completely uncharted waters. But we must remember this is still a rebuilding process. The Bulls remain a big franchise in English RL and the attraction looks to be still there. They are still able to attract quality up and down the country and even from the likes of the NRL it would seem. They may now be succumbed to life in League 1 but this was never going to be a quick fix with the snap of the fingers. But one is thing is for sure, it is going to be a long way back to the big leagues.