Supporters are the backbone of rugby league.

We’ve been fortunate to see some massive crowds in rugby league history with some even hitting six figures, however the last time this ever occurred was back before the millennium hit in 1999.

In fact, eight of the ten on this list of records from zerotackle date from before 1985 – perhaps this is a sign of increasing technology allowing more people to stay at home watch fixtures or it could be down to the fact that health and safety will not permit the cramming in of spectators as was once never even questioned.

It’s also interesting to note that just two of the list of records take place in Australia, with eight in the UK – and more specifically Wembley Stadium.

One particular record does stand out and that’s the Challenge Cup Final Replay between Halifax and Warrington in 1954 which drew in a whopping crowd of over 120,000, though that figure is sometimes believed to be even greater.

A mere 70,000 spectators were expected at Odsal for the replay, which was rescheduled for a 7pm kick-off in order to allow for rush hour traffic in Bradford at a time of increasing industry within the city.

However, here were two teams very evenly matched in a Challenge Cup fixture decider that was held in the north for the first time in a decade – and spectators duly took advantage.

Here is the list in full of the ten highest attendances ever recorded in rugby league, with independent media site zerotackle also listing the discrepancies involved with each figure. 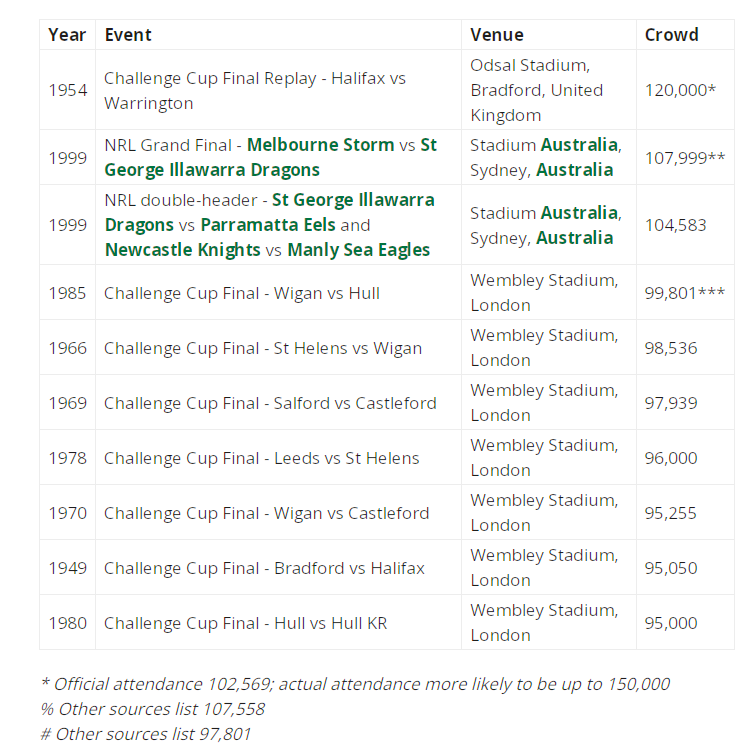