It’s always of interest to see how much – or how little – rugby league players make money-wise when compared to other sports or businesses.

With the likes of footballers able to live on their wage for the rest of their lives, for rugby stars that usually isn’t the case, with a salary cap of just over £2 million in Super League and a cap of just under 10 million Australian dollars in the NRL – which equates to around £5 million in British pound sterling.

That means that the Australian competition is perhaps always going to yield contracts that are a lot more lucrative than those on UK shores – and it’s exactly why the top ten highest-paid players in the rugby league world are, in fact, from the NRL.

Not far behind him, though, are four stars – Ben Hunt of St George Illawarra Dragons, Sydney Roosters’ James Tedesco, Manly’s Tom Trbojevic and Gold Coast Titans’ David Fifita – who are all on $1.1 million which is just under £600,000.

Melbourne Storm’s Cameron Munster and Newcastle Knights’ Kalyn Ponga will earn $1 million in 22, with North Queensland Cowboys’ captain Jason Taumalolo on $950,000 – a figure of £540,000 and around £513,000 respectively per annum.

Number eight sees Penrith Panthers maverick Nathan Cleary on $940,000 and Parramatta Eels’ Mitchell Moses on $920,000 – £508,000 and just under half a million pounds respectively. 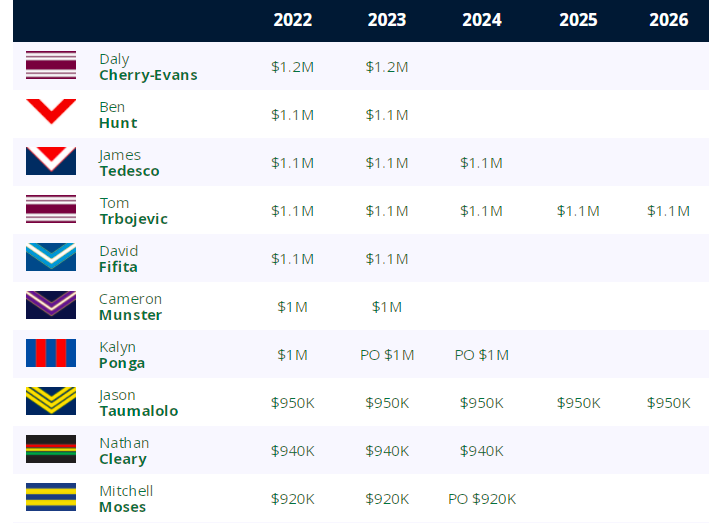