So what did we get? A ragged season by previous standards, the welcome emergence of Cas Tigers as a new force; dynamic, raging and mostly unstoppable, Thursday night football and…and…

OK. I’m like a new kid in a big school with this. I’ve only been a season ticket holder at (insert club of your choice here) for ten years but am old enough to remember when the BBC screened a match every Saturday…who could forget ‘R. Dog’, when a collie joined in at Headingley…but one of the things that’s changed during my dalliance with the game is the relationship between the players, officials, the rules and coaches. Sky’ll get a mention later.

When, after Leeds overcame Hull FC in a tough game at the end of August, the normally reserved Brian McDermott swung his guns round on gamesmanship in the game, a critical, fan-powered cyclone accused him of being a one-eyed moaner in criticising the in-tackle wriggles of which his own players were equally guilty. His comments were, however, blunderbuss and not limited to that game so anyone copying them deserved it. The targets of McDermott’s ire aside, there’s plenty to get irritated about now that wasn’t there when I first sat down on a chilly, windy night and tried to decipher what was happening on the grass in front of me.

Breaking these down into four simple headlines, let’s start with flopping as the ruck clears, intending to suggest a second effort by the tackler and moving off the mark at the play the ball (PTB). That’s always been there to a degree but, in a soccer stylee, it’s rife now with several opportunities for the attacking side to garner a fresh set of six. There’s the crooked roll-back, where a prone defender that’s cleared to the side is the target and, no less amusingly, the quick step forward and placing of the ball on the tackler’s head and shoulders, ostensibly stifling the opportunity to PTB. Refs appear wise to one or the other, or both, but either way they seem unable to spot all of the issues all of the time and that has an inevitable consequence.

Looking again at the PTB, don’t it just get your goat to see the dummy half and everyone within grinning distance with outstretched arms and an expression that screams, ‘Good lord, Referee, has your eyesight been compromised by unnatural practices to the point where you cannot see the blatant injustice that manifests itself before you?’ This more recent manifestation, which is also intended to pressurise the official, again apes the carryings-on on other professional sports but, for me, the most irritating thing is that it happens all the bloody time!  Nurse…time for my medication, please.

Moving on, one of my favourite clips is a close encounter between Lee Briers (wearing that God-awful camo kit) and the ref. Silverwood, or whoever, was telling the tale and Briers, listening with hands behind his back and to his eternal credit, responded with some well-placed ‘Yes, sir’s. 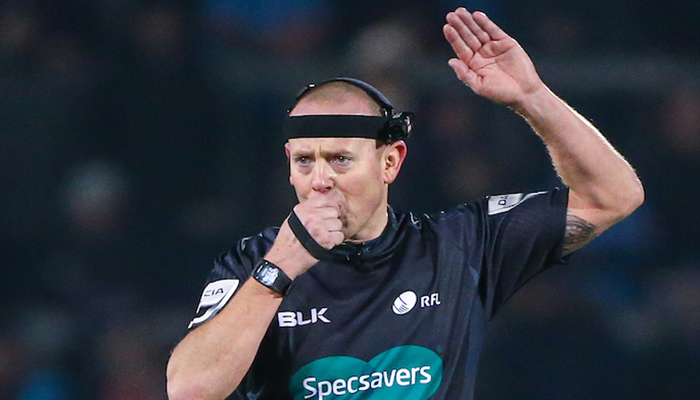 No doubt the technical bods at Sky could deliver an explanation why it isn’t audible on TV but the first time I used a ‘ref radio’ I was amazed at how much rabbiting goes on around the ruck: not at the ref. but amongst team-mates. Sky’s cameras, including the woefully under-employed head cam, now bring the wall of chat directed squarely at the ref right into our living rooms in glorious 1080p, occasionally complete with eff and jeff audio (and Eddie’s apology).

Moving away from the tackle and PTB, there’s the intentional obstruction when a half-back’s kick is about to touch down. Usually accomplished with minimal guile – referencing here the comically ill-disguised effort in this month’s Grand Final – the offending player with no chance or intention of catching the bomb will, after checking his mirrors, lift his foot off the gas and veer drunkenly into the path of a speeding opponent, who usually drops like Jurgen Klinsmann colliding with a roller skate at the top of the cellar steps.  Seriously?  If I can see this with the eyes of a rookie, how come it isn’t being wiped out?

So, acknowledging that these aren’t the only issues in our game, we’ve moved round the pitch a bit. But where do we go now? Either these behaviours are accepted as just a part of the modern game, in which case we’ll get what we deserve, or should someone, somewhere do something about it all? My money’s on the latter because failing to, er, tackle the issues facilitates them getting worse. Apologies for another soccer reference, but they call cheating ‘simulation’ because they don’t have the cojhones to yell, ‘CHEAT!’ and face immature storms of protest from managers old enough and rich enough to know a lot better. The “someone, somewhere” probably has a reserved parking space at Red Hall and the ear of top-line administrators and match officials alike but, in the absence of a direct line to that exalted being, here’s what I’d do….

1. Decide what behaviours to tackle and what sanctions they deserve.

2. Tell all the clubs before the new season, half way through it and at the end that the rules will be applied with full vigour from the beginning of the next This gives coaches time to think, question, apply and monitor, so their players thoroughly understand how they will be expected to behave. Crucially, clubs will have the opportunity to feed back to the RFL information on what doesn’t work so well.

3. Once the new rules are polished and go live, the RFL will ensure they are enforced and appropriate penalties applied. The amount of preparation and opportunity to feed back available the clubs has already removed the ‘Ah, well, y’see…we didn’t understand…’

Finally, here’s what Nigel Owens, the well-known RU ref had to say to a player who was in his ear every verse end…

“Well, I don’t think we’ve met before but I’m the referee on this field, not you. If I hear you shouting for anything again I’m going to be penalising you.  This is not soccer…is that clear?”

The player nodded and got on with his game.