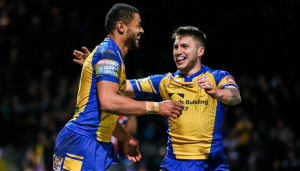 The annual failure of Hull FC to win at Headingley continues, but there is a distinctly unpleasant odour surrounding this controversial defeat for Lee Radford’s young guns, who more than matched the champions in every department.

With Jordan Abdull head and shoulders above every other player on the pitch, and giving Joel Moon a lesson in stand-off play when he came on, his display alone was worth the entrance money.

Two tries apiece for Tom Briscoe and captain Kallum Watkins gave Leeds a victory that many, myself included, believe they didn’t deserve.

The controversy reigned around two disallowed tries, a try to Jack Logan, when the young outside back was harshly ruled offside, despite clearly being behind Jake Connor when he kicked the ball.

The other was even more controversial, a try to Josh Griffin, a carbon copy of a try awarded to Briscoe by the video referee Phil Bentham, a try which again was disallowed, either of these would have given the Airlie Birds the victory their performance so richly deserved. 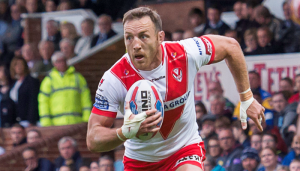 A Warrington-St Helens local derby never fails to disappoint and Friday’s encounter lived up to this tag, with the Saints extending their winning run to 5 from 5 in this year’s Super League. After a close first half, the visitors ran away with the game after a dominant second half performance, running in 4 tries in the final 40 minutes. Particular emphasis for the result must go to the home-grown quartet of James Roby, Luke Thompson, Danny Richardson and Mark Percival, with the latter securing his second hat-trick of the season.

Warrington can take heart from an impressive first half, with them holding the league leaders to only one try and managing to penetrate a St Helens defence only leaking an average of 8 points per game going into the contest, however will be disappointed with their second 40 minutes, with handling errors and ill-discipline costing them dearly and putting them on the back foot against a team setting the benchmark this year.

Ultimately this season, Warrington have been good in patches and awful in others, contributing to a league position lower than expectations early doors. If they can perform as they did in the first half consistently, they will see themselves start to rack up the wins and climb the ladder. For the Saints, Justin Holbrook will be delighted with his side’s performance in a brutal derby away from home, leaving them in good stead to welcome the champions, Leeds Rhinos, which looks set to be a mouth-watering clash. 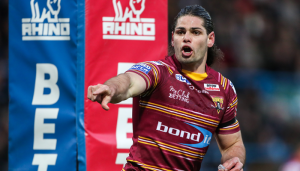 In one of two Friday night games, Huddersfield Giants travelled back over the Pennines to Yorkshire with the 2 points safely tucked away following a 28-16 victory at Widnes. The game was won in the first half, with the Giants scoring 14 unanswered points to give them a solid lead going into the second 40 minutes. This advantage improved following the dismissal of the Vikings Papua New Guinean forward Wellington Albert and tries from Oliver Roberts and Jermaine McGillvary, before the home side rallied back. The impressive Joe Mellor broke the duck for Widnes with Matt Whitley and Stefan Marsh also crossing, however this was in vain as the game was ended as a contest with two penalty goals from Danny Brough putting the game out of reach.

The victory ended a run of two games without a win for Huddersfield, moving them up to 9th in the table, whilst the Vikings find themselves with only 2 wins in 6 appearances this season. Despite this, Widnes hold the third best attack in the league, being let down by their inability to defend consistently, which is the 3rd worst in front of the bottom two, Salford and Catalans.

The challenge for the Giants is to kick on from this and record back to back victories, starting next Thursday against struggling Hull KR, meanwhile Widnes must start to chalk up the points if they are to avoid the middle 8’s, with a tricky away trip to high-flying Wakefield looming on Saturday. 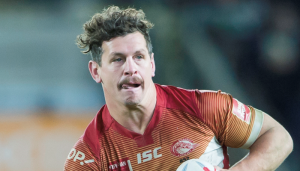 Catalans finally got a win, but they’ve still got a lot of work to do. Their attack is improving, albeit with the makeshift halves partnership of Greg Bird and Lucas Albert. Albert himself was a standout. He orchestrated almost all of their attacks, which can be daunting for a young player especially playing alongside a veteran like Bird, while his kicking game was sublime, summed up by his pin point chip for Fouad Yaha’s try.

The game ended in fairly controversial fashion, with Tim Sheens slamming referee Scott Mikalauskas. The two points that edged it for the Dragons came after they received a penalty for offside, with Michael McIlorum passing the ball from dummy-half into a kneeling Maurice Blair. Mikalauskas subsequently gave a penalty. Now for me, that’s clever play but by the letter of the law it’s a penalty for unsportsmanlike conduct, especially after it was such an issue last season. The RFL certainly need to look into the incident.

It was a disappointing result from a Rovers perspective but it’s not the end of the world. They play Huddersfield on Thursday and will be hoping to bounce back. The halves battle of McGuire and Atkin v Brough and Rankin will be particularly intriguing. 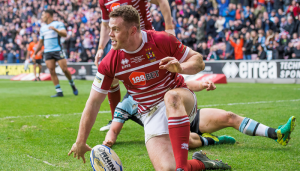 English duo Joe Burgess and Sam Tomkins put their names back in the hat for international contention just days after going unselected for England’s elite performance squad. The two home-grown talents, who both had spells in the NRL, were the forefront of the Warriors attack as the home side ended Wakefield’s 100% start to the season.

It was two other Englishmen that got the games scoring underway with young Tom Davies making a handling error deep in his own half. Wakefield capitalised and found Ben Jones-Bishop in space out wide, who got the scoresheet ticking.  Second-rower Liam Farrell helped get Burgess over for his first try of the match after John Bateman went close on the opposite side before Taulima Tautai, made his 100th appearance for Wigan after signing from Wakefield in 2015, marked the occasion with a try. Jones-Bishop found his way into the corner for the second time to push the Wildcats ahead going into the break.

Four minutes into the second half, Tomkins produced the sort of pass that got him a move to the NZ Warriors in 2013 with Burgess the happy recipient, gaining his second try of the game. The Wigan full-back wasn’t finished there and produced an equally skilful pass to the opposite wing to Davies, the winger finished spectacularly to get over the line.

Tomkins got another ‘assist’ as he tipped the ball onto Burgess, but it was the wingman’s quick feet and ambition that helped him towards a hat-trick for the Cherry and White outfit. Seven minutes from the end, Craig Huby produced an offload out of nowhere to get the ball out to Tinirau Arona and cut the deficit to 10 points, giving Wakefield a glimmer of hope for a famous comeback, however Wigan kicked a penalty goal minutes later to stretch the lead to 12 points, and run the clock down, leaving the Warriors with a 30 points to 18 victory. 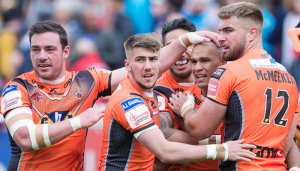 Castleford Tigers extended their winning run to three games following a 22-8 victory against the Salford Red Devils. The visitors were without talismanic full-back Gareth O’Brien amidst rumours of an impending move across the Atlantic to the Toronto Wolfpack, which looked to unsettle a defence that produced a number of comedic errors leading to Tiger’s tries. Castleford opened the scoring with the familiar Gale-Shenton combination seeing the centre cross in the corner in the wake of his omission from the England Elite Performance Squad. Tries from James Clare and Luke Gale followed after mistakes from Jake Bibby and Josh Jones, before Junior Sa’u touched down for the visitors and Bibby added one of his own either side of a Luke Gale penalty goal, however they were not enough to secure the win.

After a crushing defeat by the hands of St Helens, many were questioning whether last year was just a flash in the pan for the Tigers, however they have responded in the best possible way and sit in 5th place in the table, only 2 points behind 2nd place. Meanwhile, Salford continue to struggle at the wrong end of the table, having scored a combination of 10 points in their last two games and conceding 56. There are without doubt quality players in the Red Devils team, however they must start to show their quality and soon before they get cut adrift from the teams above them. It is still early doors for Salford to turn their fortunes around, beginning with a good performance next week at home against Hull FC.

Ian Judson you really need to go to spec savers mate, both of the disallowed tries you say were controversial were both correctly disallowed, the jack logan try was disallowed not because he was offside but because another hull player was clearly offside and was well within 10 meters of where the ball was collected, the letter of the law states in the event of a player being offside at the kick of the ball, who is then within 10 meters of where the ball is collected, a penalty is awarded to the defending team, 100% correct decision to disallow the try, i’m also going to add that hulls very 1st try should have been disallowed for the very same reason but was missed by the officials, as for the 2nd disallowed try, that you state was a carbon copy of the Briscoe try, again go to spec savers, carl… Read more »