Tomkins set a fine example in how to manage a game. He provided an assist, three tackle busts, 11 carries and gained 75 meters. The Wigan man also produced a stunning try-saving tackle to deny Regan Grace.

Has been one of the key players for Trinity this year and once again proved his worth in an impressive win over the Salford Red Devils. Tupou grabbed a try and gained 94 meters from 12 carries.

Marked his 200th match in English rugby league with a try to cap off a strong all-round performance. Webster was a prominent figure throughout as the Tigers picked up a seventh consecutive away win in the Super League.

Got the ball rolling for the Warriors with two tries in the first five minutes against the Saints and was an influential figure. Alongside his two tries, Gildart made 137 meters from 11 carries.

Continued his fantastic scoring run in the win over Huddersfield to take his tally in the Super League this year to 36. Eden also turned provider, weighing in with an assist of his own.

Gale once again showed why he is favourite for the Steve Prescott Man of Steel award by playing a key role in Castleford’s hard-fought win over Huddersfield. The 29-year-old was a real driving force, contributing with four goals and a try of his own. 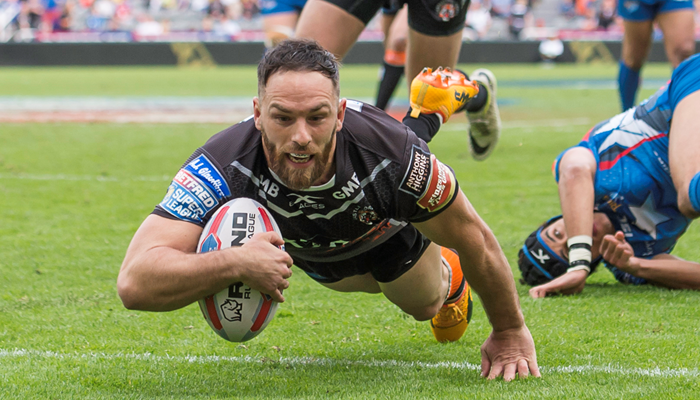 A player that the Rhinos can rely on to deliver week in week out. Leeds were far from their best against Hull FC, but Cuthbertson made a positive impact, beating three players to get over the line for his team.

What a way to make your debut! Wakefield’s newest signing enjoyed a great start to life in the Super League with a brace of tries, five tackle busts and delivered two clean breaks.

Was once again an influential force for the Tigers, gaining 111 meters from 15 carries. Castleford were made to work hard for their victory against Huddersfield and Sene-Lefao certainly got stuck in, completing 28 tackles.

He may have been on the losing side, but Taia certainly made his presence felt against the Wigan Warriors. The Saints man scored a try, completed 41 tackles and also made five tackle busts.

Played an important role as he helped the Rhinos strengthen their hold on second place in the Super League with a win over Hull FC. Ward contributed at both ends, claiming an assist and also completed 31 tackles.

One of the standout performers in Round 4 of the Super 8s. O’Loughlin showed great leadership for the Warriors, contributing with 15 carries, completing 29 tackles and gaining 97 meters.

Not like Taylor scored a far harder try than Cuthbertson at the other end!