Wheeling and dealing is set to take place ahead of the 2023 Super League season even though this year’s play-offs aren’t over yet.

For those teams that failed to finish inside the top six, there is no time like the present to build a squad capable of getting in there next season.

For Castleford Tigers head coach Lee Radford, it is set to be another big rebuild, borne out of frustration with the increasing amount of injuries and suspensions that his team faced throughout the year.

There is set to be another plethora of incomings and outgoings with those such as Derrell Olpherts, Jake Trueman and Sosaia Feki all leaving whilst Warrington Wolves star Gareth Widdop and Wakefield Trinity halfback Jacob Miller are just two of those expected to be the faces of Castleford in 2023.

However, one rumour which has been doing the rounds in recent weeks has been that of Hull KR forward Albert Vete joining the club. The prop was confirmed to be leaving Craven Park at the end of the year after two seasons at the club where he has played over 30 games.

Vete will certainly add some bulk around the forward pack – something which has perhaps been missing for a large chunk of 2022 with the amount of injuries to key players.

Though Castleford have yet to confirm the deal, the 29-year-old commented on a post by Mahe Fonua who had just announced his new deal at the Jungle.

Fonua posted on Instagram: “Grateful to be going around again. Thank you @ctrlfc for another season down at the Jungle.”

Underneath it Vete posted: “Give us a roar siana Ouaa (which means come on in Samoan) and then said “let’s raaawwwwrr doko” after being asked if they can roar together by Fonua. 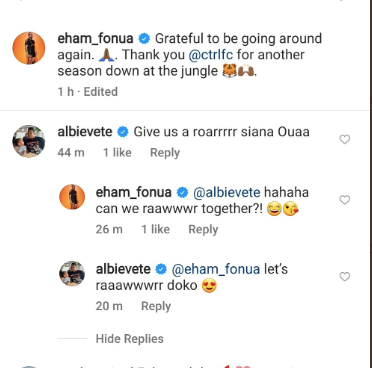 Fonua himself has been handed a one-year extension after the club exercised the option on his deal that he signed back in 2021.

The former Hull FC man is set to be joined by another man from East Yorkshire in Vete it seems based off these comments with the pair set to roar together for the Tigers in 2023.