Two vastly different preliminary finals have left us with a highly anticipated and hugely unexpected Grand Final. The minor premiers the Melbourne Storm obliterated a busted Brisbane Broncos to book their rightful place at the Big Dance. Joining them are the NRL’s Cinderella story North Queensland as the Cowboys dug deep and put their spurs into the error riddled Sydney Roosters and booted them out.

OMG! Wow! Giddy Up!!! This isn’t a fairy tale, this wasn’t an upset, this was the Cowboys rocking into the Grand Final – that’s how they roll up in the tropics! Shit just got real homies as they say in downtown Townsville or is it LA? Might have my cities (and hemispheres mixed up). From eighth spot on the table to possible premiers, the Cowboys fully deserved their magnificent victory. They have now won three games straight in Sydney, all as the underdog, and now face their biggest challenge but do not underestimate them. They are playing brilliant finals footy and have the momentum and belief to take the next step. The faith in their footy is driving them as they are playing remarkable rugby league. Beautifully coached, the well drilled Cowboys are taking teamwork to new levels, churning through their sets, running hard and tackling harder for each other! Instead of tiring, as most people expect, they are motoring home. They’re tough and hitting their straps at the right time. The stars are aligning as the footy Gods smile down, Matt Scott looks like returning next week!

The control with which Michael Morgan is playing at present, is out of this world. He is totally composed and his game management is without peer in the playoffs. He is leading his Cowboys around the park as if he was destined for rugby league divinity. He set the tone with a 40/20 in the early minutes and his catch and pass to put Kane Linnett over was just sublime. His timing is impeccable. Each moment it seemed the Roosters were clawing their way ahead in the contest, Morgan would strike. It was a thrilling counterpunching contest. Both sides slugged it out but when it came to the latter rounds the Cowboys held their nerve and had the knockout blows. The Cowboys are fighters and traded haymakers until the Chooks choked. The tale of the two 7’s was pivotal, Morgan a clear winner with a big KO over Mitchell Pearce. To be fair to Pearce the Roosters forwards lacked aggression in comparison to the Cowboys and were MIA.

The Chooks have fallen a game short of the Grand Final but have no one to blame but themselves. Their nasty habit of not playing 80 minutes came back to bite them hard. It was an error riddled display that gave too much ball and territory to the Cowboys, who are in no mood for dishing out charity. In typical Roosters fashion, they somehow poked their beaks in front coming into the last quarter but in a snap shot of their season, they went from the penthouse to the outhouse in a set of six as Blake Ferguson scored then lost the ball a minute later and consequently the lead never to regain it. The Roosters escaped against the Broncos two weeks ago but there’s only so many Houdini acts one team can perform. Mistakes get amplified at this stage of the season and the Chooks were like a rubber chicken under a magnifying glass in the blistering Midday sun and melted like an object in a Dali masterpiece. From 15th to 2nd and a week away from the Grand Final is an amazing transformation in one year, the disappointment will burn all Summer and put fire in the feather dusters belly for next season.

Latrell Mitchell had a night to forget. The Rooster superstar failed to fire in an error-prone performance. He scored a freakish try in the shadows of halftime but as the Cowboys fantastic run morphed from fairy tale into reality, Mitchell’s preliminary playoff turned into a nightmare. Kicking out on the full twice, poor defensive plays and a minimal contribution with ball in hand Mitchell unveiled the whole Roosters kit bag of cock ups. Trent Robinson must take a brickbat here though. Why was Mitchell on the wing in the first place? If Daniel Tupou was fit he had to play on the wing or not at all. His combination with Mitchell has been lethal this season. Mitchell showed against the Broncos what he can do from the centres, he not only played out of position but was wasted on the wing and Robinson burnt a bench spot playing an obviously unfit Tupou who played a paltry 10 minutes in the Roosters foul performance. The Roosters paid the price and Robinson must wear some criticism. He rolled the dice with Tupou and came up snake eyes.

On first glance this looks like a walk in the park. The 30-0 score line is no indication of the Storm’s inconsistent display. Craig Bellamy will drill his men all week after a very ordinary first half an hour where the minor premiers fumbled and bumbled their way around AAMI Park. The errors kept the Broncos in the contest and sent Bellyache into convulsions in the coach’s box. Bellamy’s antics in the box were vaudevillian as he bounced off his seat and bellowed after each blunder, his cortisol levels ballooned from dangerous (prior to kick off) to “call the priest!”. A brilliant Curtis Scott offload on the stroke of the orange break sent Josh Addo-Carr away and calmed the Storm, the crowd and Bellamy to a degree – he only stripped one wall of paint during his halftime spray. 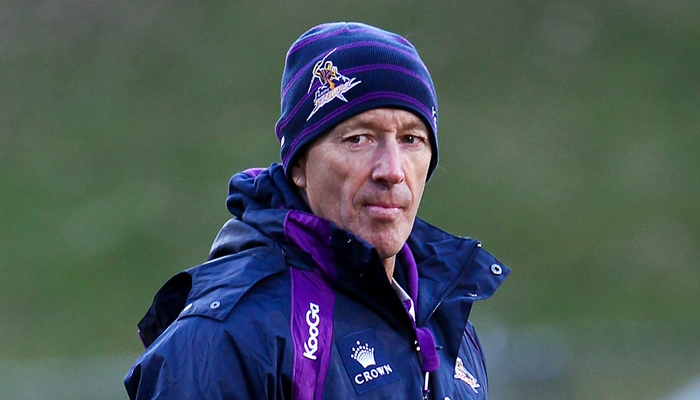 The second stanza show cased the Storm’s sensational season. Once settled they clicked into gear and ran away with the game. Billy Slater added two more magical meat pies to his finals feast of memories but both came via the extraordinary offloading of Felise Kaufusi, whose ability to pop passes and piercing hole running put the Broncos to the sword. The Storm had too much firepower for the Broncos and the danger for the Cowboys next week is when Melbourne do get the machine humming they’re virtually unstoppable. Nerves are the chink in the armour. Two finals games have framed two frantic first halves. The Broncos weren’t good enough to make the Storm pay, the form the Cowboys are in they will.

The Broncos rode into Melbourne bruised and ambled off into the sunset battered and broken. They gave it everything they had but fitness and freshness is an alluring asset at this stage of the season that eluded the Broncos. The Storm were vulnerable early and against this quality you must take every opportunity. The Broncos blew two gilt edged chances and with it went the game. Corey Oates was clattered by the flying Fijian Suliasi Vunivalu in the first chance dropping the pill and then Tautau Moga did a ‘Haynesy’ and decided to go for glory instead of passing to an unmarked Oates. Moga had an unfortunate end to his Broncos career but was not on his Pat Malone as the whole side clocked off once the score went beyond two converted tries. Matt Gillett can hold his head high, the Kangaroo had a blinder in a beaten side. Not sure I can say the same of Adam Blair and Jordan Kahu who decided cheap shots were the way to exit the season. Cooper Cronk and Billy Slater copping late hits as the one-sided contest turned a tad ugly mirroring the final score.

It’s rare that Wayne Bennett gets it wrong and maybe it wasn’t his call but it was obvious within ten minutes that Darius Boyd was struggling with his dodgy hamstring and should never have played. Every player has some sort of niggle at the pointy end of the season but some gambles are worth taking. Bennett knew his Broncos needed Boyd to beat the super Storm even risking his skipper’s chance at fronting up to the Big Dance the following week. The Boyd experiment backfired big time, he was never a fear factor for the Storm and the Broncos should have kept last week’s spine with Kodi Nikorima at the back but hindsight is a wonderful thing not afforded a desperate coach and captain. The truth is the Broncos were spent by the time they hit the playoffs. The Roosters should have pumped them by 20 and they struggled past a puffed-out Panthers before plummeting out of the playoffs after the Storm brought not only thunder but a humongous hammer.

The best thing about the preliminaries was the refereeing. Two weeks ago, every fan and their dog were howling about the officials and the keyboard warriors were venting their spleens about contentious calls instead of the exhilarating exhibition of rugby league. The whistle blowers got the message, pocket the pea, and let the sides sort it out unless it’s necessary. It’s from the Bill Harrigan School of Minimalist Engagement (known as ME) and Hollywood Harrigan always produced a quick game and a good game. Every official has lifted their game, no bunker bungles and even a touchy called a forward pass, no I’m not kidding ya! Let’s hope the referees (and Cameron Smith) let the two grand finalists sort things out themselves (to a point) and that the best team wins!