When growing up with the great St Helens teams of the late 90’s and 00’s, it is hard to stomach and comprehend what has happened to one of Rugby League’s greatest clubs in recent years. Their achievements on the field have drastically deteriorated, with regular appearances in the Grand Final between 2006-2011 a distant memory. The club have fallen short in the semi-finals in the previous two seasons, while this year’s competition sees them sat perilously in seventh place, avoiding the middle 8’s on points difference, and looking set to miss out on the Super League play-offs for the first time since its inception in 1998. So what has gone so wrong then for the St Helens club?

The main identifiable issue that has catastrophically weakened the playing team is the woeful recruitment policy that the club have put in place. The retirement of world class players in the last decade such as Paul Wellens, Paul Sculthorpe, Sean Long, and Keiron Cunningham was always going to have a huge impact on the successes on the field, however still to this day; the positions of such influential players are yet to be filled. The loose forward role owned by Sculthorpe is still vacant, with Saints fans unable to name a player who plays in the role on a regular basis. It is a similar situation at full-back, with the talented but increasingly injury prone Jonny Lomax missing more games than he plays. With the hookers, James Roby’s natural progression to become the dominant first choice has been a success; however, with him approaching 32 years of age and showing signs of burnout, a new young hooker needs to start breaking through from the academy.

Despite possessing a number of bright young stars, the coaching staff appear to deem them not ready yet, meaning the continued use of veteran Tommy Lee, who to be brutally honest, wouldn’t be anywhere near gaining a place in the Saints teams of yesteryear. In the forwards, gone are the days of Saints having powerful enforcers like Roy Haggerty, Vila Matautia, Sonny Nickle and James Graham, who put fear into the opposition. Finally, St Helens teams of times gone by have always been associated with world class halves (Long, Pryce, Goulding, Martyn and Murphy to name a few) and centres (Meninga, Lyon, Gidley, Talau, Newlove, etc). This allowed them to play an exhilarating and edge-of-your-seat style of rugby which earned them the nickname – the entertainers. The emergence of young Mark Percival and Theo Fages are encouraging, but for every bright young star sees the perseverance of mediocrity with Ryan Morgan and Matty Smith lining up on the opposite side.

Before we are reminded that due to the current state of the game, the recruitment of talented domestic and overseas players like in years gone by has ended, other teams have managed to recruit gems that have lit up the competition, from both Down Under and from Super League rivals. Just look at Castleford with Zak Hardaker, Junior Moors, Jesse Sene-Lefao and Ben Roberts; Leeds with Matt Parcell and Joel Moon; Wakefield with David Fifita; and Salford with Junior Sau and Ben Murdoch-Masila. Quality players are available through good recruitment, with St Helens appearing to sign cheaper, lower quality squad fillers such as Dominique Peyroux, Jack Owens, and Luke Douglas amongst others. 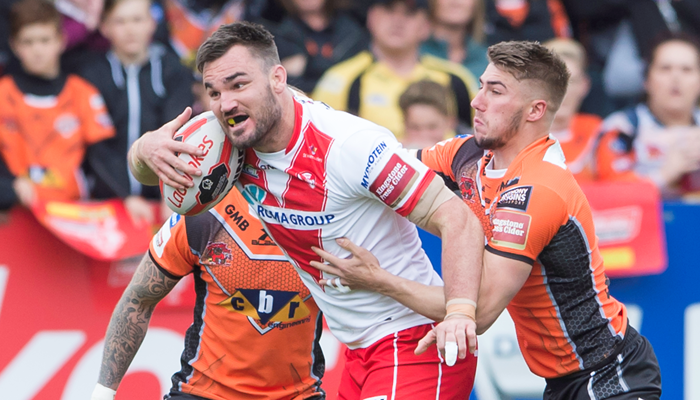 It seems to be the case that since St Helens left Knowsley Road, the investment in recruitment for the first team has taken a back seat in favour of investment into creating a state of the art, debt-free stadium. Whilst this is to be admired, the stadium was completed over half a decade ago, with the process of scrimping on the first team becoming an unwanted habit that has stuck.

The last few season in particular have seen the Saints adopt a conservative, and safety-first style of play that goes directly against the flamboyance which brought them success in the 90’s and 00’s. Throwing the ball out wide to talented outside backs has been replaced with five drives down the middle. Breath-taking length of the field tries have dried up with barge over low-quality tries taking their place. Heart-racing power plays on the last have been reduced to a long kick downfield on the third tackle. Never say die attitudes and putting bodies on the line for team-mates has withered away to form weak defensive lines, this has seen the Saints concede 93 points in their last two games. A return to the glory days for St Helens needs a return to the style from the trophy laden years, throwing off the shackles of structured plays and producing a more off-the-cuff and adventurous brand of rugby.

Although the club are beset with problems, there is some cause for optimism. This comes in the form of the arrival of new coach Justin Holbrook, who is expected to be watching at the Magic Weekend, and taking charge of his first game with a spine-tingling derby game against Wigan. Hopefully he is up to the challenge and has not underestimated the magnitude of the task that faces him. An injection of new ideas is badly needed at a club gradually growing stale with a job-for-the-boys culture. This has seen many former players shoehorned into roles to which they are under qualified and ultimately not suitable for, including Keiron Cunningham, who for most fans was not the man for the job when he took charge less than three years ago. Hopefully a fresh pair of eyes will draw an upturn of form that can turn the direction of the club. This includes getting the most out the misfiring players that still possess the quality required to pull the shirt on at St Helens.

Moreover, the low league position and the expected failure to achieve a play-off place may drive the board to induce a vast overhaul of the club and provide much needed investment in some top-quality players. The remainder of the season poses an unprecedented and unfamiliar challenge for the Saints, as they look to secure their Super League status for 2018 – something that would be deemed unthinkable less than a decade ago. Huge games against Hull FC, Wigan, Salford, Castleford and Leeds loom in the coming weeks, with an unpredictable end to the regular season fast approaching.