With the regular season now finished, we at Serious About Rugby League have come together to select our Super League Team of the Season.

If you don’t agree with our choices, comment at the bottom with your selections.

What a first season Hardaker has had at the Mend-A-Hose Jungle. Having recently signed on a permanent basis with the Tigers, there is no question he has helped take them to another level. Still only 25, Hardaker is arguably playing better now than when he won the Steve Prescott Man of Steel in 2015. Surely he will be England’s full-back at the World Cup!

A few eyebrows were raised when Castleford signed Greg Eden, but he has certainly silenced the doubters as he sets his sights on Super League’s try-scoring record. With 34 tries on the Tigers prolific left-edge, Eden will be hoping to pick up where he left off when he returns from a shoulder injury in the coming weeks.

There aren’t just Castleford players in this team, we promise! However, it was very hard to leave out their captain and king of the assist Michael Shenton. If Eden does break the try-scoring record, the first person he should thank is his skipper. A large percentage of his 19 assists this campaign have resulted in a four-pointer for his winger.

Along with Alex Walmsley, Percival has been by far St Helens best player this season. Despite their struggles at the start, the 23-year-old has been the Saints constant shining light in 2017. He has contributed with an impressive 14 tries and 12 assists, with a place in the centres for England at the World Cup surely on the cards.

Injuries have marred the Warriors campaign and seen them blood an unprecedented number of young players, resulting in Burgess playing out of position in the centres. However, the 22-year-old has adapted superbly and still managed 16 tries. Now back on the wing, he will look to start producing his best and impress Wayne Bennett.

It was a calculated risk when Lee Radford signed Albert Kelly. He knew if all his attention was on the pitch, then he could become the signing of the season – and that’s exactly what’s happened. With 17 tries and 8 assists, the former KR favourite has been a revelation for the Airlie Birds.

The architect of Castleford’s phenomenal season. With 12 tries, 18 assists and 107 goals, Gale has been the competition’s stand-out player and has delivered top-class performances every match. Now all that remains is for the Tigers’ talisman to produce at the business end of this campaign and win some silverware.

After a mixed season in 2016, Walmsley has returned to the form that saw him nominated for the Steve Prescott Man of Steel a year earlier. The powerhouse forward is the competition’s top metre-maker with 3185 and Saints’ second top try-scorer with nine. He will certainly be an asset to England at the World Cup.

Replacing James Segeyaro wasn’t going to be easy, but I would be surprised if the Leeds fans can even remember his name, such has been the impact of Matt Parcell. The pacey hooker has sparked the Rhinos revival in 2017 and helped himself to 12 tries and 11 assists. At 24, Parcell still has his best years ahead and has been a great addition. 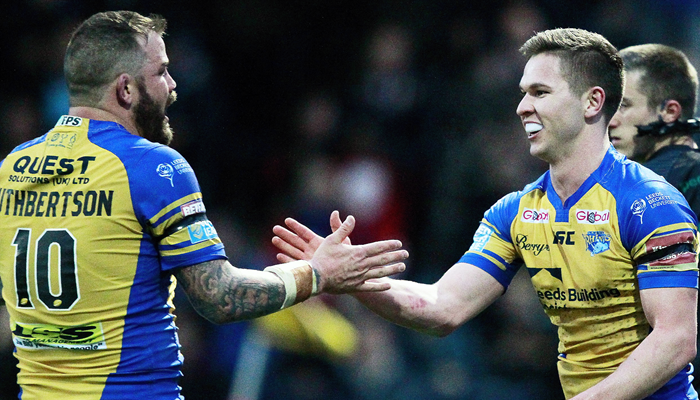 Much like Alex Walmsley, Cuthbertson didn’t hit the heights we expected last season but has returned to top form this campaign. The 2015 Man of Steel nominee is aiming to break his own records for offloads in a season (125), with 95 to his name so far in 2017. With the ball-playing ability of a half-back, the elusive forward has also bagged nine tries.

Man-mountain Masila has almost been unstoppable at time this season and is one of Salford’s most dangerous assets – especially close to the line. This is emphasised by his 13 tries, the most of any Red Devils player. Ian Watson will be hoping that his most devastating forward can continue his fine season in the Super 8s.

In such a talented Castleford team, the work of players like Millington can often go unnoticed. He is one of the competition’s most underrated players and has been for some time. This season is no different, with his hard work setting the platform for both Hardaker and Gale to produce their magic. The Australian forward has also contributed with a handy six tries and four assists.

Much like Millington, the work of Adam Milner must be recognised in this team. He has reinvented himself as a loose-forward and puts his body on the line every game. The 25-year-old is a fans favourite at the Mend-A-Hose Jungle and for his sheer effort and determination this season, Milner deserves to win some silverware.