Salford host Widnes in round 12 of Super League, with both sides coming into the game on the back of strong wins.

The Red Devils come into the game in the better form with four wins out of their last five, including last week’s 29-22 Challenge Cup victory over League 1 side Toronto. It was a game they should have probably won more comfortably, however, they did play most of the game with 12 men after Justin Carney was sent off just before half-time.

Before that, they gained impressive victories against St Helens and Hull, before being pushed close in a hard-fought derby win over Leigh. Their only recent defeat came in the South of France, where they were downed 38-6 by Catalans. Ian Watson’s men are certainly turning heads this year with their performances and could move up to third in the table this weekend if results go their way.

Widnes will be looking for a repeat performance of last week’s win over struggling St Helens. The Vikings only won by two points but dominated the game throughout, with Joe Mellor and Tom Gilmore both constantly improving their halves partnership.

The win was a timely one, coming after three straight defeats at the hands of Wakefield, Warrington and Leeds. They do, however, still sit at the foot of the Super League table. Coach Denis Betts, though, will undoubtedly see last week’s result as a catalyst to kick-start their season, and back-to-back wins would give them a massive confidence boost. They start the game as underdogs, but I wouldn’t be surprised if they produce an upset.

Salford are without winger Justin Carney for the visit of the Vikings, as he is currently awaiting the verdict after being accused of racially abusing a Toronto player during last week’s game. The Devils are still missing Junior Sa’u and Weller Hauraki through injury, while Gaz O’Brien picked up a knock last week and so is also unavailable. Young three-quarter Jake Bibby is therefore recalled, after signing a new two-year contract earlier in the week. Lee Mossop, Josh Wood and Josh Jones have also penned new deals.

The Vikings are boosted by the return of forward duo Hep Cahill and Eamon O’Carroll, after both recovered from injuries. Chris Houston is also recalled to the 19-man squad, after being a late inclusion for last week’s win over St Helens. The bad news is that there is no Rhys Hanbury, while Chris Bridge is yet to recover from an injury picked up in last week’s warm-up. Elsewhere, prop Jay Chapelhow is replaced by brother Ted, while young hooker Danny Walker also drops out despite his impressive form of late. 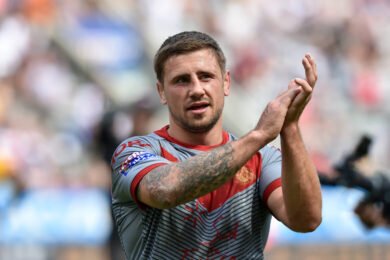