Former Melbourne Storm winger Elijah Niko spent last week training with Leeds Rhinos, according to the Yorkshire Evening Post. The 28-year-old from New Zealand is under contract with Rhinos’ rugby union sister club Yorkshire Carnegie until the end of next season. He has now returned to the union club but is believed to be being monitored by the Rhinos.

Meanwhile, the Rhinos are set to offer forward Wellington Albert a two-year deal. The 24-year-old PNG international is currently on trial at the club and made his debut against Hull KR on Thursday but is believed to have impressed coach Dave Furner enough to earn a permanent contract.

FC star in the clear

Hull FC utility back Jake Connor appears to be in the clear, despite rumours circulating on social media that he was involved in an incident at an amateur game. The 24-year-old, who currently coaches Pennine League side Ovenden, was allegedly videoed running onto the pitch and fighting with opposition players and fans.

It was first reported on a Forty20 Facebook live broadcast, however the rumour has since been rubbished by journalists. According to The Guardian rugby league writer John Davidson, it is a “non-story” and Connor “did nothing wrong”.

Manly second rower Joel Thompson could be set for a move to Super League in 2020, according to The Mole. The 30-year-old is off-contract at the end the season and is believed to have several UK clubs interested in his services.

Among them are Toronto, however the Wolfpack will most likely need to be promoted for any deal to materialise. Huddersfield and Hull FC are also rumoured to be among his suitors. Thompson has a wealth of experience having played over 200 NRL games for Manly, Canberra and St George and so would be a huge coup for Super League. 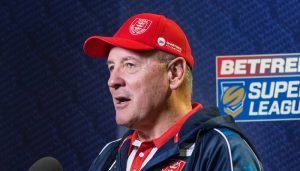 Cronulla Sharks have offered Hull KR coach Tim Sheens the chance to return to the NRL, reports the Australian Daily Telegraph. The Sharks are reportedly lining him up to be the club’s new General Manager in a move that could take the 68-year-old back down under before the end of 2019.

Sheens is currently in the final year of his contract at Rovers and, despite rumours he is in discussions about an extension, could take up the option to return home. Penrith General Manager Phil Gould has also been touted as a possibility to take up the position, but Cronulla would favour ex-Australia boss Sheens.

Giants in for Bulls youngster

Huddersfield Giants are set to sign Bradford Bulls starlet Oliver Wilson, according to League Express. The 20-year-old prop is an England Academy international and has received high praise since bursting onto the scene at the end of last season.

The Giants are reportedly close to securing him on a multi-year contract after having a six-figure fee accepted by Bradford. Head coach Simon Woolford sees Wilson as a long-term project and is keen to pair him with fellow youngster Matty English in the front row.