Crunch time arrives as we enter the semi-final phase and the usual suspects have reached the final four, Australia, England, New Z… hang on a second! The Kiwis getting booted out the back door by the fabulous Fijians and the seismic shifting rise of Tonga has rugby league entering a new and exciting sphere of global uncertainty and is all the better for it. The looming spectre of the Pacific Islands has the established nations awaiting the thunderball to confront them. League, rugby league has been shaken and stirred by a hopeful new world order. Time will tell if it’s a fad like fidget spinners. The spectacular Pacific Island nation’s emphatic displays has earned them respect and a tilt at the title. Embrace it and enjoy it. We have the potential of an all-Pacific Island World Cup Final!

Brisbane the epicentre of rugby league in Australia finally gets a taste of World Cup action as Suncorp Stadium hosts the first semi-final. Fiji may have surprised some in toppling New Zealand but have now made their third consecutive World Cup semi-final. The try-less contest reinforced how mature this side has become as Fiji produced a professional display pocketing the party tricks and rolling up their sleeves to show they can grind out a game. Jarryd Hayne said Fiji are in the business of slaying giants, well the ogre has grown as their opponent this week are super-sized. The Kangaroos are the ultimate notch on any belt. Fiji must repeat their defensive effort of last week but sharpen their attack. They’ll need to score at least two or three tries to win and for all the brilliance within the Bati backline, they couldn’t break the Kiwis down despite a glut of possession and field position. Ashton Sims and his fellow forwards are crucial to the outcome as if they can hold their ground Fiji has the talent to take down the Kangaroos. Jarryd Hayne has been reticent to run the ball but must offer this option to challenge the awesome Australian defence. On the edges, Brayden Wiliame and Viliame Kikau have been running excellent lines but escaping the clutches of Boyd Cordner and Matt Gillett is a tough task. This is where the kicking game is key to a Kangaroo cull. Hayne and Henry Raiwalui must build pressure finding the in-goal and look to the Heavens for a leaping Suliasi Vunivalu and Marcelo Montoya, it may be their most productive pathway to points.

The Kangaroos went up a notch against a very disappointing and insipid Samoa. A glorified training run in the end, the Roos rolled through the ruck ruthlessly which gave halves Cooper Cronk and Michael Morgan time and space to unleash a rampaging Billy Slater. The beneficiary of all these magicians was winger Valentine Holmes who bagged a Kangaroo record five tries but won’t be given the opportunity to repeat that performance as Fiji are far more combative and slicker than Samoa. The Kangaroos will start fast and hard to put the Bati on the back foot as Fiji played such an energy drenching game against the Kiwis, physically and mentally. Australia will look to David Klemmer, Aaron Woods and the impressive Reagan Campbell-Gillard to dominate. RCG was immense in impact off the interchange bench and giant Jordan McLean wasn’t far behind. Cameron Smith will then control the tempo and play the puppet master, running and passing with precision. The Kangaroos are not invincible but the chinks in their armour are minuscule. Every chance offered to Fiji must be taken. It’s a tough ask for Fiji to back up but the one thing they have in abundance is faith and they’ll need all their prayers answered to ascend to the decider. Pre-tournament Mick Potter said they could win the whole thing. I scoffed and declared if Fiji won the Cup I’d eat my first born raw but if Fiji keep defending like last week, pass the salt!! Unfortunately for Fiji, and luckily for my son, the Kangaroos are hungry for more glory. They have too much class and will bound away in the final quarter to set up a place in yet another World Cup Final. 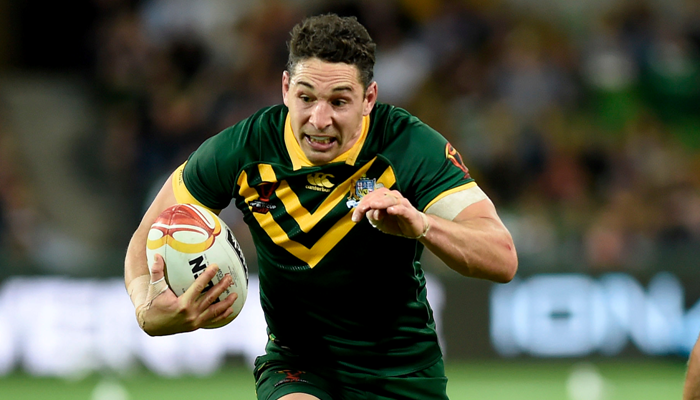 Batten down the hatches Auckland this second semi-final at Mount Smart Stadium will be brutal. The Tongan juggernaut rolls on after scraping past a gallant and somewhat unlucky Lebanon but runs into the mighty English ‘Wall of White’ fresh from pumping Papua New Guinea. The forward collisions will be colossal both packs powder kegs ready to explode. The highlight will be the battle between Tonga’s wrecking ball with shoulders like boulders Jason Taumalolo and England’s Slammin’ Sam Burgess. It will be a personal game of Last Man Standing the winner handing their team the inside running for a place in the final. Taumalolo is Tonga’s talisman and if England can limit his effectiveness it will go a long way towards deciding this contest as the Melbourne Storm highlighted in this year’s NRL Grand Final. In a big boost for Tonga, Sio Siua Taukeiaho returns to beef up the pack. Combined with Taumalolo and Andrew Fifita they can deliver the TKO to English dreams. The match ups out wide are mouth-watering. Tonga will believe through Konrad Hurrell they hold a killer punch on that side, while England will fancy Kallum Watkins and Jermaine McGillvary causing chaos as they did dining out on the Kumuls left edge. They will be a handful for their Tongan counterparts Michael Jennings and Daniel Tupou but this experienced pair are a massive step up from PNG. McGillvary, along with Taumalolo, has been the star of this World Cup. Like Taumalolo he is a tackle busting, monster metre-eating match winner and England need to feed him as much ball as possible. The spine is an area England will feel they hold an advantage. Tonga’s halves Ata Hingano and Tui Lolohea were wobbly down the stretch against the Cedars and at this stage of the tournament cannot afford to fold under pressure. On the flipside, England’s half Luke Gale was dynamic as he shook the shackles off and ran the ball, immediately wreaking havoc. Gale will be doubly dangerous if he mixes up his game with shifts out the back combined with a speedy show and go as the great Jonathan Thurston likes to call it channelling Will Ferrell’s Ricky Bobby. Gale could give Tonga, ‘Talladega Night’ frights if he cuts loose. Shake ‘n bake baby!

Gareth Widdop is the Formula One three-quarter on the field, a lap ahead of the rest in class. Some of his touches last week were sensational and England have looked miles better with Widdop’s wizardry at the back. The dynamic dummy half duo, Josh Hodgson and James Roby were excellent last week. Hodgson’s kicking game adds great variety while Roby’s speed will be a major factor as the Tongan defence tires as they did last week. Lebanon nearly ran Tonga down as they faded, the draining Kiwis game taking its toll. Tonga survived, the Kiwis weren’t so lucky. Add Alex Walmsley and Thomas Burgess taking on Ben Murdoch-Masila and Tevita Pangai Jnr barrelling off the bench and its game on. England’s Achilles Heel are errors. The completion rate was appalling last week and Wayne Bennett revelling in his role as league’s Clint Eastwood rode into the press conference calling England’s error-riddled display, the good, the bad and the ugly! The ugly for Bennett was having to watch the game, for the journos it was having to sit through another mumbling moan from Australia’s Victor Meldrew. If England repeat last week’s bumbling they’ll have more than one foot in the grave and Bennett’s English coaching career will be dead and buried with it. A lot of the lost ball was through the heavy contact by the combative Kumuls, I’ve got news for England, the Tongans are twice their size and hit three times as hard. Bennett’s game plan will begin with point one – hang onto the pill!!! Bennett, the master of the mind games, has been questioning eligibility rules to unsettle Tonga, which is code for Wayne’s worried and with good reason. Tonga are playing for a fistful of dollars compared to the riches of the tier one nations but this is a mission where faith not money is the motivator. Tonga has been the story of this World Cup, their passion and pride driving them towards a date with destiny. The magnificent Mate Ma’a Tonga support in the stands will play 18th man making this feel like a home game and may hand Tonga the impetus to surge for a famous victory. This shapes as an epic encounter and nigh impossible to call. Place a dart in my hand, spin me around four times and I’ll try hit the board. Oh, and duck!

Enjoy the footy and remember gamble responsibly. Despite the excitement and anticipation of a new world order in international rugby league with the Kiwis going out in the quarters, Tonga and PNG marvelling, Ireland impressing and Lebanon inspiring, towering above all is the all-conquering Kangaroos. The RLWC has been a wonderful exhibition of nations from all corners, well mostly Northern England, un petit pocket in France, PNG, a few small dots in the Pacific Ocean containing large athletic men and two states in Australia but that’s beside the point and I don’t care because there’s been exciting matches but none featuring the Aussies, who routinely slice opponents apart with the clinical expertise of a surgeon. The Kangaroos are the professional party poopers turning this carnival into a one-sided procession to the rugby league throne. Hopefully Fiji can force the crown to fumble in the Aussies grasp this week and make them sweat.

Sometimes I wonder would it be a better World Cup if Australia weren’t in it? Maybe organisers should ‘forget’ to invite them to the next one, tell them it got lost in the mail? The Kangaroos set standards the other countries need to aim for. Is there a team left in the competition that can vanquish the grand gladiators of our global game? We have two weeks to find out or maybe one. Vanuinui vinaka Fiji!