The spring internationals are less than a week away and while all eyes will be on England, their opponents are certainly not a team to be taken lightly. Samoa have assembled a star-studded squad, calling on a wealth of NRL talent. Brisbane duo Anthony Milford and Josh McGuire head the side, while Joey Leilua, Sam Kasiano and Mata’utai brothers Sione and Peter add to the numerous threats Matt Parish has.

Elsewhere, Tonga will play Fiji on Saturday and like Samoa, both have named formidable squads. Former Australian internationals Daniel Tupou, Michael Jennings and Andrew Fifita had already pledged allegiance to the Mate Ma’, however, the latter two pulled out of the squad. As replacements go, though, they don’t get much better than Kiwi legend Manu Vatuvei, with ‘The Beast’ now set to play under Kristian Woolf at the World Cup. Fiji will be a tough test this weekend, however, naming the likes of Kevin Naiqama, Suliasi Vunivalu and Korbin and Tariq Sims.

Yet another halves dilemma

In a World Cup year, it’s important for countries to establish their sides, with halfback partnerships at the top of the priority list. So isn’t it just typical for England that two of our top options for the positions get injured a week before the Test against Samoa. Just 24 hours after the squad was named Gareth Widdop tore a medial ligament, before George Williams picked up a knee injury of his own on Saturday.

Stefan Ratchford and Kevin Brown have been called up, but who will partner Luke Gale? I’d personally like to see Ratchford get the nod, as his skills have yet to be fully tested on the international stage. It is, after all, a warm-up game. So, what’s wrong with taking some risks and trying out some new players?

The weekend’s shock result came on Thursday, as Danny Brough inspired his Huddersfield side to a mammoth win over second place Leeds. Despite being plagued by injury, Rick Stone’s men produced a five-try performance to prevent the Rhinos from going top, just four days after their Challenge Cup loss to part-timers Swinton.

It was an emotional week for everyone at the John Smith’s stadium, after learning of the news that owner Ken Davy’s wife, Jennifer, had sadly passed away. Her connection to the club and the players themselves was truly special, with Brough and Jermaine McGillvary both dedicating the win to her. You have to feel as if there was something extra in their performance, there was more to play for than just two league points. They were playing in memory of a true figure in our sport, who will be remembered by all at the Giants, and across the whole of Rugby League. 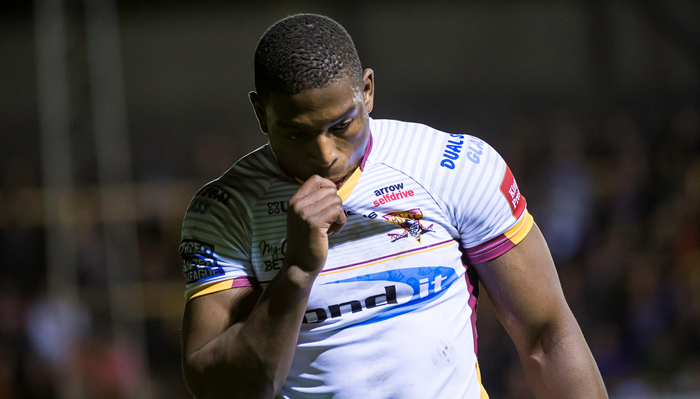 Those who looked at the Super League results on Sunday could have been forgiven for thinking that there was an error in the system. Both Wakefield vs Catalans and Salford vs Widnes ended in with exactly the same score line, with Trinity and the Devils both coming away 30-10 winners.

Mason Caton-Brown starred for the West Yorkshire side, scoring a hat-trick to condemn the Dragons to their sixth defeat of the season. Salford, on the other hand, kept up their red hot form, with Ben Murdoch-Masila scoring a brace to help his side climb to third in the table. Ian Watson’s men are the real deal this year and are continuing to shock the rest of the league. The question is, will they still be up there come September?

There is an increasingly strong prospect that this year’s Qualifiers could see a domestic battle happen outside of England, with our two French teams looking more and more likely to face each other. Catalans are currently in eighth and struggling to hold down any consistent form, while Toulouse are in second and are still yet to lose a game at home.

Should the Dragons drop down into the bottom four by July, it could set up an interesting battle, with Toulouse desperate to prove that they are the top team in France. Sylvain Houles’ side have raised plenty of eyebrows in the Championship, after only being promoted from League 1 at the start of the year. But with plenty of quality in their ranks, they are blitzing their opponents, even beating competition favourites Hull KR last week.