Leeds Rhinos have tied down young centre Harry Newman to a new deal that will see him stay at Headingley until the end of the 2022 season.

The 19-year-old has been one of the Rhinos’ standout players this season, scoring eight tries in 16 appearances and was named in the England Knights squad for the first time this week.

He has also previously spent time on dual registration with Featherstone Rovers, racking up a prolific record of 22 tries in 18 games over the past two seasons.

? ‘He’s a player that would be coveted throughout the world of rugby league.’

It is almost two years to the day since Newman made his Rhinos’ debut against Wigan at the DW Stadium, where he became the first player born in this century to play in Super League.

“I’m absolutely delighted,” he said. “It has been a long process getting it all sorted but we’ve eventually got there and I absolutely can’t wait to commit my next three years to the club.

“You only have to look at the fantastic facilities we have now at Emerald Headingley to know the future is bright here. I’ve got a lot of friends here, we have a good squad and we will get there as a team. I’m really looking forward to the next three years.

“It has been tough for everyone this year, especially for me. I found it quite hard sometimes coming into a side where we have been struggling but it’s given me a great opportunity to really kick on and prove what I can do and hopefully bring my best game to the side.”

Director of Rugby Kevin Sinfield said: “As a club we are making sure that our best young players have a future at the club. 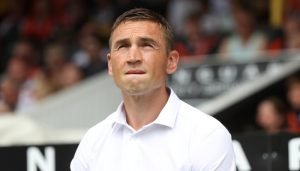 “Harry has a great deal of potential and his challenge is now to cement his place in the team over the coming years.”

Leeds Rhinos coach Richard Agar added: “Harry brings bags of enthusiasm to the team and is always keen to learn and develop his game. He is one of the brightest talents in the English game and has been mentioned by clubs in the NRL so it is a major boost to us, and the Super League competition, that we have retained his services. I have no doubt, if he continues to work hard, he will become a key member of our team over the next few years.”