One of many rising stars from the London Broncos setup. Sadiq Adebiyi is getting some valuable game time for Oldham at the moment and he’s taking the opportunity with both hands. Scoring his first try for the Roughyeds against Featherstone last month, Adebiyi has gone from strength to strength with his powerful running game. The youngster may have a tough job getting into the Broncos first team next year but he will certainly be better off after his experience at Oldham.

A player who goes under the radar. Brad Day has been terrific for the Bulldogs since crossing West Yorkshire from Castleford Tigers. With a keen eye for the try-line, Matt Diskin’s side can always count on Day for a good performance. At a club which has seen players receive interest from Super League clubs in the past, Day is in a good place.

Gareth Moore is turning into a fans favourite at Dewsbury Rams, and he hasn’t been there for long. He wears his heart on his sleeve and the half-back is a big part of the team chemistry currently building at the Rams under the stewardship of Neil Kelly. Dewsbury look to be home and dry in the Championship after a rocky start to the year. The likes of Moore and fellow mid-season signing Macauley Hallett have certainly helped the Rams’ situation. The good news doesn’t stop there either as the former Halifax playmaker has just signed a new deal at the club. Good times ahead for the Rams?

With a relegation dogfight on their hands, Swinton Lions will be hoping to find a couple of wins from somewhere to ease the nerves. Having Jack Murphy at full-back certainly gives them a good chance. The ex-Workington number one is a good player for the Lions, and the way he chimes into the line makes him hard to defend against. Although Swinton were hammered in their opening Shield game against Batley, they will be confident of survival after bringing in reinforcements. Could the combination of full-back Murphy and new half-back Izaac Farrell be enough to save Swinton from relegation? 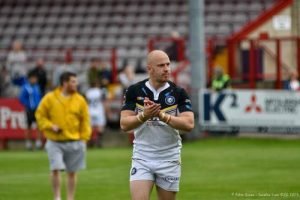 Jack Owens initially signed for Sheffield on loan from St Helens before the move was made permanent in the latter stages of the regular season. Owens has been a good acquisition for Mark Aston’s men. He’s done a solid job at full-back but directed proceedings against Oldham from half-back last weekend. If he can replicate the form he showed on Sunday for the rest of the season then the South Yorkshire club will fancy their chances of making a second consecutive Shield final.

Stan Robin had his first taste of Championship rugby last season when he was on loan at Sheffield. He impressed then, and he’s certainly impressed this season for Olympique who have looked right at home in the second tier. With a great kicking game and a running style which can send defences into panic mode, the French international has been a shrewd pickup by coach Sylvain Houles. He may have had a bigger impact if Johnathon Ford stayed fit for the duration of the regular season. Toulouse fans will be keeping their fingers crossed that the duo will rekindle their partnership in 2018.

He may not have played many games for the Bulls but he’s certainly made his mark. Damian Sironen joined Bradford from Queensland Cup’s Tweed Head Seagulls and he hasn’t taken a backwards step, despite the club’s poor form as a whole. The Provident Stadium side will do well to keep hold of Sironen in League 1 as he can definitely do a job for most teams in the second tier. Two Man of the Match performances in his first two games speaks volumes about his ability, especially when you consider the short time he had been in the country.

Jono Smith’s running style makes him great to watch. It’s like a bull in a china shop. There’s no neutral gear, it’s straight into the ribs, trying to dismantle the defence.  But it’s not just his carries that make Smith the forward he is. A few weeks ago, the Hornets Twitter account released a video of a try they scored in a recent match. Smith flung a no-look offload straight into the hands of a teammate who had a walk-in. The skill on show was sublime and that is what Smith is capable of providing. The Hornets are fighting for safety in the Championship and Smith’s experience with North Wales may well come in handy